Hi to all you who have been faithfully following this blog for the past I-don't-know-how-many years, well it's moved to my Old 3rd Michigan website. You can find it right here:

You can still search the new blog and you can sign up for notifications of future updates as well, right on the page.

Thanks again for your support all these years!

Steve
Posted by Steve Soper at 2:35 PM No comments:

Leonard was 44 years old, married with six children and probably from Lyons, Ionia County, when he enlisted for three years at Lyons on October 11, 1864, in Company C, 3rd reorganized Michigan Infantry.

He died of disease on January 8, 1868, at Murfreesboro, TN, and was buried in the National Cemetery at Stones River plot F, grave no. 2505. 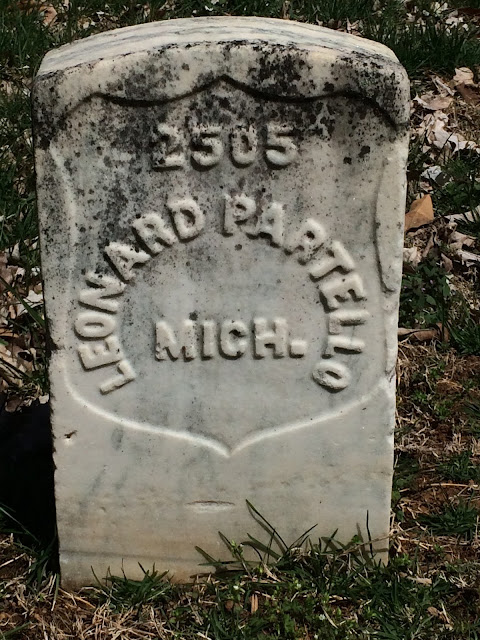 Posted by Steve Soper at 7:13 AM No comments:

Peter’s parents were married in 1834 in Chatham, Ontario, Canada (where Barbara had been born), and resided in Chatham until sometime between 1843 and 1845, when they settled in first Sparta then Alpine Township, Kent County, Michigan. In 1847 and 1850 Hiram and his family were living in Plainfield, Kent County, and back in Sparta by 1854. By 1860 his father owned and operated a substantial amount of land in Sparta, Alpine Township. That same year Peter was attending school, working as a farm laborer and living with his family in Sparta.

He was 20 years and probably still living in Sparta when he enlisted with his parents’ consent in Company C on May 13, 1861. (His younger brother Andrew would join Company F in 1864. Peter’s sister Elizabeth married the brother of Allen Thayer would also join Company F, 3rd Michigan about the same time as Andrew Myers.)

Peter was shot in the shoulder on August 29, 1862, at Second Bull Run, and admitted to Bellevue hospital in New York City on September 12, 1862, from the steamer Bellevue. He remained hospitalized through January of 1863. He was awarded the Kearny Cross for his participation in the battle of Chancellorsville, Virginia on May 3, 1863, and was again absent sick in the hospital in August.

Peter eventually recovered and rejoined the Regiment. He was taken prisoner on November 30, 1863, at Mine Run, Virginia, and reportedly confined at Andersonville prison along with a brother who had joined the 1st Michigan cavalry (who allegedly died around August 1, 1864, at Andersonville). By the end of 1864 Peter was a prisoner in Blackshire, Georgia. He was paroled at Jacksonville, Florida on April 28, 1865, admitted to the hospital at Annapolis, Maryland on June 20, and discharged the same day.

After he left the army Peter returned to Sparta.

By 1870 peter was working a large farm and living with his wife and daughter in Sparta, next door to his parents and siblings. By 1880 the family had moved out west and living in Creighton, Knox County, Nebraska. The family eventually returned to Michigan. Peter may have been a member of the Old 3rd Michigan Infantry Association.

Peter reportedly died in April of 1883, probably in Sparta, and was buried in Meyers cemetery, Sparta: 0-123-1.

In August of 1883 Henrietta was living in Michigan when she applied for and received a widow’s pension (no. 885766). She eventually married Charles Marsh and in 1891 (?) she applied on behalf of one or more minor children for a dependent child’s pension which was granted (no. 354965).
Posted by Steve Soper at 6:18 PM No comments:

Even though Harden was a member of an Ohio company of sharpshooters and not the 3rd Michigan I'm including him since his monument in Newaygo City Cemetery (Michigan) is truly unique.

While it is not uncommon to see a life-size statue of a Union soldier at a Grand Army of the Republic Monument, it's rare to see one at the grave of a single soldier.

Posted by Steve Soper at 4:15 PM No comments: