Clark and Betsey settled in Canada sometime before 1833. Between 1836 and 1839 they moved the family to Ohio and between 1846 and 1848 moved from Ohio to Michigan and by 1850 had settled in Byron, Kent County where William attended school with four of his siblings, including his younger brother Almon who would also enlist in Company F, 3rd Michigan in 1861.

William was 20 years old and possibly living in Kent County, Michigan, when he enlisted in Company F with the consent of the Justice of the Peace (and not curiously enough with the consent of his parents) in Company F on May 13, 1861 along with his brother Almon. William was possibly wounded on August 29, 1862, at Second Bull Run. In any case he was reported as a patient in Seminary Hospital in Alexandria, Virginia, when he was transferred to Philadelphia, Pennsylvania about September 1, 1862.

William was first reported as transferred on January 24, 1863, to the 2nd U.S. Cavalry, but a War Department notation in his military service record dated March 7, 1876, canceled that entry and added that in fact he enlisted at Philadelphia, Pennsylvania on November 28, 1862, to serve one year and six months (or roughly until the end of his original enlistment), and was subsequently assigned to Company F, 1st U.S. Cavalry .

William returned to Michigan after the war and by 1870 he was working as a day laborer and living with his parents in Byron, Kent County.

His widow was living in North Dakota in 1920 (?) when she applied for and received a pension (no. 714670). That same year she may have been the same Mary Wilson who was living with her daughter and son-in-law, Mary and Ben McDonald, in Minot, North Dakota. 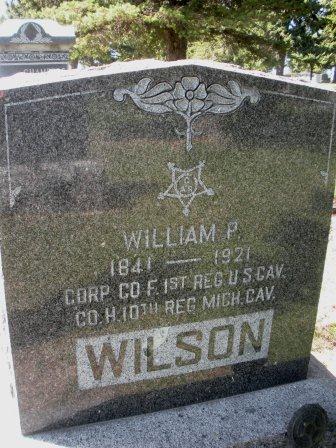