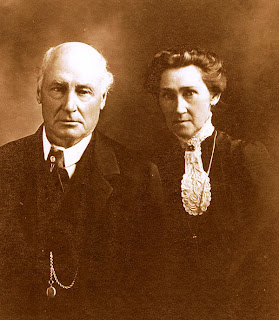 One of the main objective of the numerous and various veterans organizations which spriung up throughout the country after the civil war was to seek monetary compensation for both the survivors of the war, as well as dependents of those who had perished during the conflict.
(photo: King Olmstead and his wife.)

Such compensation usually took the form of pensions, to be paid to each recipient for life.

All the soldier had to prove was that he had served honorably for at least 90 days and that he somehow suffered from an injury or disease contracted while serving in the army. Dependents had to prove both a pre-existing relationship with the deceased soldier as well as need for pension monies. 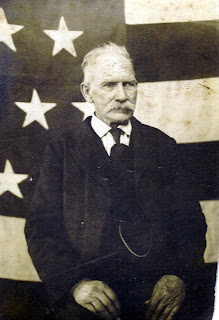 Of the 971 men who survived the war, at least 327 (and possibly as many as 362) became members of the Third Michigan Michigan Infantry Association, a fraternal organization which existed from 1870 to 1927. (photo: Henry Clay.)

The last man to join was DeWitt Forman in June of 1912.

The Association was officially disbanded by the surviving six members in 1927.

In the state of Michigan, 198 men are known to have joined Grand Army of the Republic posts, although certainly that number must be low given the popularity of that organization.

Of the survivors 91 men eventually became residents of the Michigan Soldiers’ Home which opened in Grand Rapids in 1885. In September of 1885 Ozias Martin (admission number 7) of A company became the first man of the Regiment to enter the Home. Alfred Ames (number 8154), also of A companywas probably the last man of the Regiment to enter the Home; he became a resident in November of 1927. (Although the men were originally referred to as "inmates", Jeannine Trybus of Grand Rapids has suggested that "resident" would be a more appropriate word and I agree.Thanks Jeannine!)

It is also likely that at least 24 men at one time or another were residents of the various National Military Homes: probably 3 in California; probably 2 in Illinois; 2 in Marion, Indiana; 1 in Leavenworth, Kansas; 2 in Togus, Maine; 6 in Dayton, Ohio; and 8 in Milwaukee, Wisconsin. Altogether 114 men (11% of the survivors) became inmates of either state-sponsored or federal veteran support care system.
Posted by Steve Soper at 12:47 PM No comments:

Where are they buried? 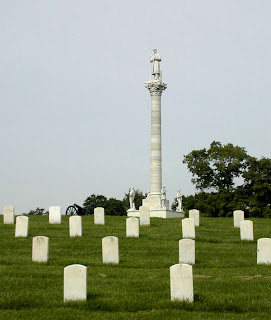 We know that 440 died from 1861 through 1865, leaving a balance of 971 who probably survived the war out of an overall total of 1,411 men who joined or enlisted in the Third Michigan infantry. 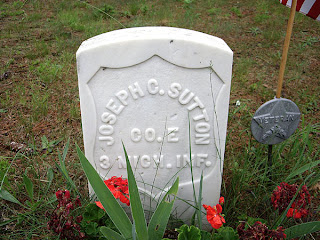 Of the 760 men reportedly buried in Michigan, by far the largest number (207) are found in Kent county, and of that number 39 are buried in the “Michigan Soldiers’ Home” cemetery. Clearly then of the men who survived the war, the overwhelming number of men returned to Michigan where they lived out their lives. (photo left: Joseph Sutton, buried in Burdell cemetery, Osceola County, Michigan.)

The next largest number of Old Third burials in Michigan is in Ottawa county (49), followed by Ionia county (42), Barry county (32), Muskegon county (28) and Newaygo county (22).
Another 197 are buried in Virginia, many like those who died at Groveton on August 29, 1862, in mass graves.

Many of the men who died in Virginia are probably interred in unknown graves scattered throughout the state, like so many more tens of thousands of soldiers.

For example, it is likely that of the estimated 35 men who died at Fair Oaks, Virginia, on May 31, 1862, all are interred in Seven Pines National Cemetery, although we have exact locations for only a fraction of that number; and the men who died at Groveton on August 29, 1862, and whose remains were reportedly brought to Arlington National Cemetery and interred there (in a mass grave very close to the Custis-Lee mansion), are “Unknown” today.

The fact that so many men who died in prison camps remain “unknown” is well-established. However, it is also quite likely that several of the Old Third soldiers who returned to Michigan during the war and died at home today rest in unmarked graves. This is particularly true for Samuel Camp in Lamont, Ottawa county, Francis Barlow, Henry Kampe and William Gibson in Grand Rapids, as well as Chauncey Strickland.

In any event, 957 of all men who served in the Third Michigan, or nearly 69% of the total enrolled, died and were buried in either Virginia or Michigan.

Next: Civil War veterans' organizations
Posted by Steve Soper at 1:09 AM 1 comment: