[This may be the same James Hayward who served in Company K, 3rd Michigan Infantry.]

James C. Hayward was born in August 14, 1821, in Mount Morris, New York, the son of Abijah Hayward and Rachel Allwood.

By 1850 they were living in Amherst, Lorain County, Ohio and moved on to Michigan between 1854 and 1858. By 1860 James was working as a shingle-maker living with his wife and three children in Nelson, Kent County. (In 1860 there was a deaf farm laborer named Amherst Hayward living with the Vorce or Bouce family in Ionia, Ionia County.)

James enlisted in Company F, 6th Michigan Cavalry on September 8, 1862, at Nelson for 3 years, crediting Nelson, and was mustered on October 13 at Grand Rapids where the regiment was being organized. The 6th remained on duty at Grand Rapids until December 10 when it left for Washington where it participated in the defenses of the capital. He was discharged for disability on April 1, 1863.

He reentered the service (listed as James Haywood) in Company K, 6th Michigan cavalry on February 22, 1864, for three years, and was mustered the same day, and was transferred to Company H, 1st Michigan Cavalry on November 17, 1865. He was discharged at Detroit on April 16, 1866. James eventually returned to western Michigan.

Hayward who was working as a farmer and living with his wife Jane and son Charles in Richland, Montcalm County in 1880. He was living in Michigan in 1880 when he applied for and received a pension (no. 291775) for service in both cavalry regiments.

By 1890 the James Hayward who had served in the 6th Michigan cavalry was living in Home, Montcalm County.

In 1900 he and Cynthia and her son (?) from her first marriage, James Phelps, were living in Courtland.

James was a widower when he died of old age on June 1, 1905 and was buried in Vinewood cemetery, Edmore, Montcalm County, alongside Jane.
Posted by Steve Soper at 7:21 AM No comments:

Posted by Steve Soper at 9:33 AM No comments: 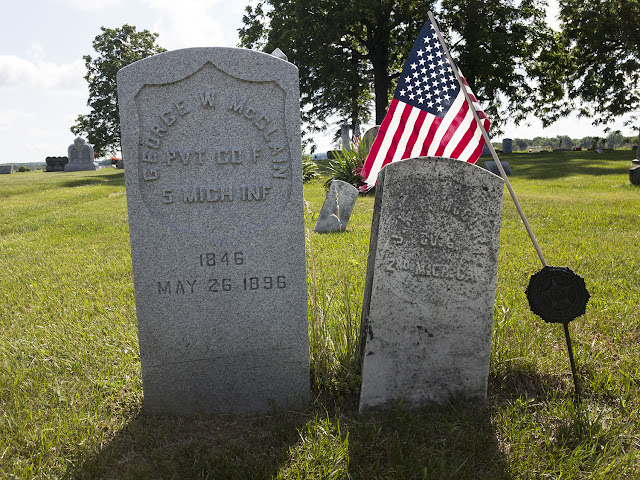 Posted by Steve Soper at 9:35 AM No comments: 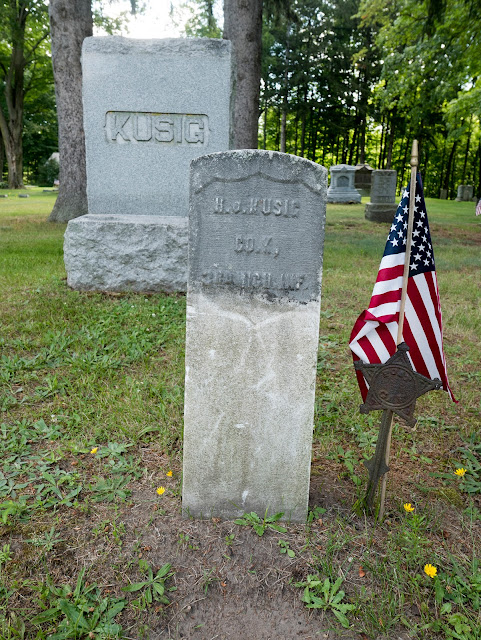 And the ubiquitous GAR statue: 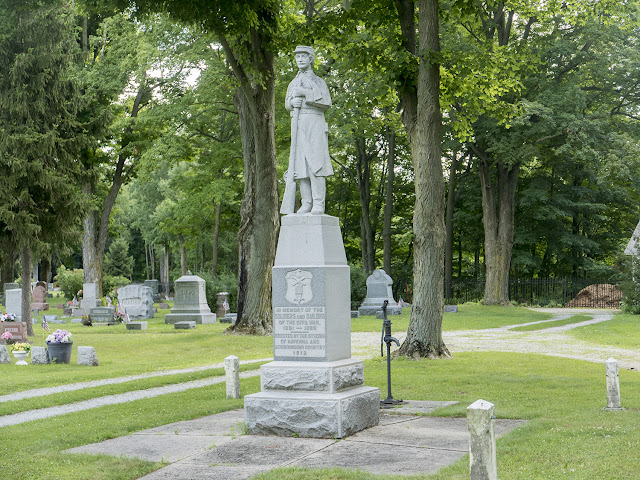 Posted by Steve Soper at 9:48 AM No comments:

Posted by Steve Soper at 9:59 AM No comments: