After the death of his first wife, Ohio native Jacob married Ohio-born Lucinda or Lorinda Reed (b. 1820) in 1840, probably in Ohio. By the late 1840s John’s family had moved from Ohio to Chicago where they were residing between 1847 and 1848, but within two years had moved across Lake Michigan to Muskegon, Muskegon County, Michigan. According to one source, after living in Muskegon for about a year, local “Indians poled them up the Muskegon River in two canoes to Croton and while there Indian boys were his playmates and companions.” (It is possible that only John and his older brother Horatio made this emigration westward in the late 1840s followed in the mid-1850s by their parents and the rest of the family.) By 1855 the family had moved to Dayton, Newaygo County, reportedly building the first house in the Township.

In 1857 John assisted his father, brother and two uncles in cutting a road from Croton to the family farm. In the fall of 1858 John purchased from the government 80 acres in Dayton on which he built a cabin.

In 1860 John was elected Dayton Township clerk and that same year he was working as a laborer and living in Dayton, when he married his first wife, Connecticut native Maryette or Margaret Stone (1843-1884), on November 25, 1860. (She may have been a sister to Phoebe Stone who married John’s brother Horatio in 1859.) They had at least two children: Gilbert A. (b. 1868) and Herbert A. “Together,” wrote one source, “they toiled as only those pioneers did toil to build the homes that stand as monuments today to their greatness.”

John stood 5’8” with blue eyes, dark hair and a dark complexion and was 25 years old and probably still living in Dayton when he enlisted with his older brother Horatio in Company H on March 12, 1862 at Grand Rapids for 3 years, and he was mustered the same day in Grand Rapids -- their younger half-brother Simon would enlist in Company K in August. (Company H, formerly the “Muskegon Rangers”, was made up largely of men from the vicinity of Muskegon and Newaygo counties.)

In July of 1862 John was sick in the hospital through August, and allegedly deserted on September 21, 1862 at Upton’s Hill, Virginia (he was probably still hospitalized). In any case, he returned to the Regiment probably on October 26, 1862 at Catlett’s Station, Virginia.

John was shot in the right forearm at Spotsylvania, Virginia on May 12, 1864, and subsequently hospitalized. He was transferred to Company A, Fifth Michigan Infantry, upon consolidation of the Third and Fifth Michigan Regiments on June 10, 1864, and was reported absent sick. In July he was listed as a Corporal although he still remained absent wounded. Although he was reported in January of 1865 as having died, in fact he remained hospitalized until he was discharged on account of his wounds on December 24, 1864 (or February 26, 1865), at Augur general hospital in Philadelphia, Pennsylvania.

After his wife died in 1884 John married May Thompson on May 4, 1886, and they had at least two children: Ernest and Horatio (the latter probably named after John’s brother who died during the war). They were living in Hesperia, Oceana County in 1890, but by 1911 he had returned to Fremont.

He was for many years a director in the Grangers’ Mutual Insurance Co., a member of the Old Third Michigan Infantry Association, as well as a member of Grand Army of the Republic Henry Dobson Post No. 182 in Fremont and a charter member of Hesperia Grange P. of H. no. 495.

According to one source, John “was a member of the Trustee Board of the local M.E. Church, a regular attendant of the Sunday School and preaching service and always manifested great interest in the church and welfare of the community.”

John died of myocarditis on Wednesday November 27, 1915, in possibly in either Hesperia or Dayton Township, and was buried in Maple Grove cemetery in Fremont: block B-38. “The love and respect,” wrote the Fremont Times-Indicator,

in which he was held by his neighbors and coworkers was manifested by their presence in large numbers at his funeral which was held in the little church he so much loved. The casket was covered with beautiful flowers and draped with the flag of his country. Rev. M. A. Oldt and Rev. George van Wingerden spoke words of consolation to the bereaved and the choir sang his favorite hymns. As the shades of evening were falling he was laid to rest in the cemetery at Fremont. In the passing of John Barnhard this community has sustained a loss that will long be felt. A pioneer who has lived on the farm he hewed out of the wilderness over 60 years [ago], whose life was truly crowned with success. We shall miss his cheerful presence, his wise councils, but the influence of his life will be an inspiration to those who follow after and his good works will long remain. 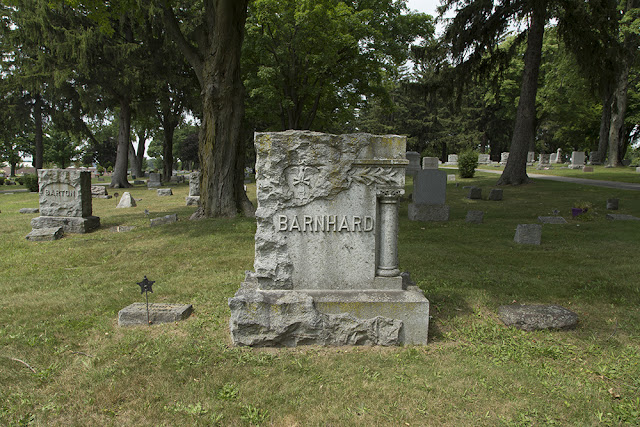