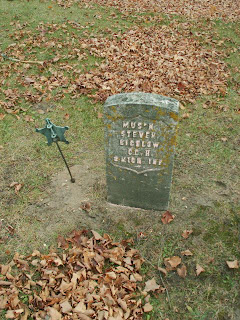 Stephen E. Bigalow, also known as “Bigelow”, was born March 4, 1838 in either Vermont or New York, the son of John (1814-1898) and Eliza Davis (b. 1820).
Vermont-born John married English-born Eliza and by 1840 had left Vermont (or New York), eventually settling in Ypsilanti, Michigan. By 1850 John had settled in Emmet Township, Calhoun County, where he worked as a millwright and Stephen attended school with his younger sister Phebe.

Stephen stood 5’7” with black eyes, dark hair and a dark complexion, and was a 23-year-old laborer possibly living in Muskegon or Grand Rapids when he enlisted on April 28, 1861, as Fifer in Company H. (Company H, formerly the “Muskegon Rangers”, was made up largely of men from the vicinity of Muskegon and Newaygo counties.) He was present for duty through the fall of 1861, but apparently taken sick in November and was reported absent in a hospital in Alexandria. In fact, he had apparently been treated in the regimental hospital for some two months then sent to the Seminary Hospital in Alexandria. He was apparently returned to the regimental hospital about the first of February of 1862, but remained absent sick until he was discharged for consumption on April 4, 1862, at Camp Michigan, Virginia (although he may have been in the hospital at Old Point Comfort, near Norfolk).

After his discharge from the army Stephen returned to Michigan and lived for a short time in Grand Rapids. He eventually moved north to Mecosta County (his father had apparently settled on some land outside of Big Rapids) and was residing in Big Rapids’ Fifth Ward in 1876, 1888, 1890, 1894 and 1897; indeed he probably lived in Big Rapids most of the rest of his life.

His half-sister, Dr. Phebe French (she married George French in 1865 who had served in Company K of the Third Michigan Infantry), treated Stephen for a number of years for “enlargement of the liver”, along with a number of other ailments.

Stephen was a widower when he died on May 31, 1903, presumably at his home in Big Rapids. He was buried in Highland View cemetery, in Big Rapids.
Posted by Steve Soper at 1:28 PM