By 1850 George was possibly working as a farmer for and/or living with the family of John Shantz in Aurelius, Cayuga County. He was married to New York native Hannah (b. 1829) and they had one child, Ella (b. 1855). They moved to Michigan from New York sometime between 1855 and 1860 when George was living with his wife and child and working as a master carpenter and cabinet-maker in Bingham, Clinton County. By 1861 George was either divorced or a widower (during the war his sister Libby took care of his daughter).

When the war broke out George was First Corporal of the Boston Light Guards, a prewar militia company. Formed in the Boston, Ionia County area many of whose members would serve in Company D.

Indeed, he stood 5’9” with dark eyes and hair and a light complexion and was 34 years old and residing in St. Johns, Clinton County when he enlisted as Sergeant in Company D on May 13, 1861 (and was possibly related to Benjamin Hammond and Marshall Hammond, both of whom would also enlist in Company D).

On November 22, 1861, George wrote to his sister Libby (who was taking care of his daughter Ella) from Fort Lyon, Virginia, telling her “My health is pretty good at present with the exception of a slight cold which makes me cough. . . .” And on February 23, 1862, he wrote from Camp Michigan to his daughter Ella, who was apparently living with George’s sister Libby and her husband Charley. “We are encamped near Mount Vernon, in Virginia on the east side of the Potomac River. I am pretty well and I hope you are the same. It is a good while since I have heard from you but I hope it will not be long for the war is almost over and when the last shot is fired I will return home to see my Ella and then I will tell you about the war. You must be good to your Uncle Charley and Aunt Libby. Go to school and learn to read and write. Remember the prayer your mother learned you.”

I just received a letter from some kind friend who resides I think in St. Johns stating that my brother's health was very poor & also that my little Ella was not properly cared for; it was sad news for me. My health is very good. The one that [sic] (wrote) to me said Charley is going away and that he intends to take my little Ella with him. I feel as though she was the only one on whom my future hopes are concentrated. To be sure I have neglected her, but I had the assurance that she would be taken care of in case I got wounded or; now then it is my request that she be permitted to stay in the village & I do not want my things to be taken away. I sent Ella five dollars in care of Leonard Traver [Leonard Travis?] Feb. 11th, but I have not head [sic] from him since he got his discharge. Neither have I heard from Charles nor the things I sent by him.

I still hold to the Village of St. Johns as my place of residence. I can't tell whether I will get my discharge or not, my wound is healed & I am taking care of the wounded soldiers in the hospital. There has been an act passed in the house [of Representatives] that all wounded soldiers must have have their pay in sixty days. Then I shall send Ella some money to buy her some clothes. Now then Mrs. Smith as you & your husband have been a friend in need I wish you would write a few lines about my little Ella; if you see Emily tell her if Charles goes away, to take Ella and find a place for her as I do not want her to go away. I wish the friend that wrote me would write & let me know his or her name.

I would like to hear from Mrs. Brown that used to visit my family. I hope she is still living & many other friends & e'er long when the war is o'er & the dark clouds have passed away I will return to greet you once more as a citizen & a friend & to all that are loyal to our Nationalities. John, give all my respects to those who may inquire.

On April 16, 1863, while still in the hospital, George wrote home to Libby and Ella. He wanted them to know that he was well, although his future in the army remained uncertain for the moment.

I don't know how long I shall stay in the hospital. The surgeons are sending of all that are fit for duty to the field. My health is pretty good. My wound is almost sound but I think it is not sound enough for a long march yet the government is sending the convalescent & such soldiers that can do something to guard forts & hospitals. Perhaps it will be my lot to do such duty until my time is out, unless the war ends soon. You said you was going the first of May to see about Ella's pay from the County. Charles is gone I suppose by this time on the Lakes. I got a letter from Samuel Harris stating that Libby had arrived in Auburn. You take care of my things & live in the house until I come. I have got just one dollar & thirty cents & I will let you have the dollar & keep the 30 cents when I get my pay which will be in May about the middle I think, I will send you more. Emily it costs more to get things here in Washington than it does in Michigan. I can't get enough of tobacco to last me a day for 10 cents, so I will give up chewing. A great many of our soldiers depends on the charity of the Relief Committee so they can send their money home. All I ever got was about 5 cents worth of tobacco & the calico shirt & sent to Ella. Here is a picture of 100 dollar Treasure [sic] Note on green back. Give it to Ella and have her put it in her mother's work box until I come home. The likeness that you got of a mother & child belonged to a soldier in a Pennsylvania Regiment; he was sick in this hospital & he gave it to me to keep for him., He was sent to his state and forgot to take it. Emily write & let me know how Libby left things when she went away. No more at present. Learn Ella to write if you have any time. Let me know how mother is if you know.

In June George was reported to be in the “Invalid Corps” (the Veterans’ Reserve Corps) through August, and by December he had been reduced to the ranks for offense(s) unknown, and he was a private. On December 5, 1863, he wrote to Libby and Ella from Brandy Station, Virginia.

I shall tell you of all the hardships & privations that I have gone through since I left the hospital for to go to the battlefield. I have been in 3 more fights with the rebs since I left. I have suffered extremely for the want of clothing” and that “the weather is so cold that it freezes our clothes on us. Many a soldier freeze so that he is not fit for duty. The other morning we were ordered out on picket & to find out where the rebs were. It was long before daylight. Well in going about a mile & a half we found them on the other side of a deep ravine with a few trees between us. Our captain wanted to know who would go down to the woods & see if they were there. There was three & myself that run down as quick as I got down I saw a rebel officer pointing towards us & telling his men the damned yanks were coming, so [I] brought my gun down on him and fired. I saw him pitch forward and fall. Well the result of it was I had about a dozen shots fired at me.

Well I set behind my tree until the sun came out then we were ordered to charge on them. We drove them clean up to their breastworks. Well we lost a good many men. The rebs wanted us to surrender. Some of our Regiment did, but Co. D would not give up our guns. We made up our minds that we would sooner die. There is only 15 men left of us and I am the only one from St. Johns. If I live to get home I will tell you all I am going to send you some money. I saw Steve this morning and he got a letter stating that you were going to break up house keeping. You had better try and keep up until I come. I begin to count the months which is only six and soon I can count the days.

He went on to say that he had sent $7.00 home and that he planned to “send you $5.00 more and keep on sending you every week until I send you 25 dollars and then when pay day comes next month I will send you $15.00 more. I shall send you $50.00 this winter & spring unless the rebs get me . . . for I have got 52 dollars in my pocket which I have kept for you and Ella. I send you 50 cents to buy some postage stamps; send me 8 stamps & keep the rest for yourself. I would send you the whole now but I am afraid you would not get it. Tell Ella to be a good girl. My hand & arm is poisoned with ivy that I can't write.”

He presumably returned to the Regiment on or about the first of February and by May of 1864 he was again absent sick in the hospital. He eventually rejoined the Regiment and was transferred as a Sergeant to Company F, Fifth Michigan infantry upon consolidation of the Third and Fifth Michigan Regiments on June 10, 1864.

George was taken prisoner on June 22 near Petersburg, Virginia, and probably exchanged or released in late November or early December of 1864. He was a Corporal when he died either on December 15, 1864, in the general hospital Division no. 1 at Annapolis, Maryland, or on December 16 on board the hospital steamer Northern Light. In any case, he was reportedly buried in Annapolis National Cemetery, official no. 638 or 666, presently reported in section L, grave no. 126.

In 1867 a minor child pension application was made by one Charity Harris reported as guardian (no. 121688). 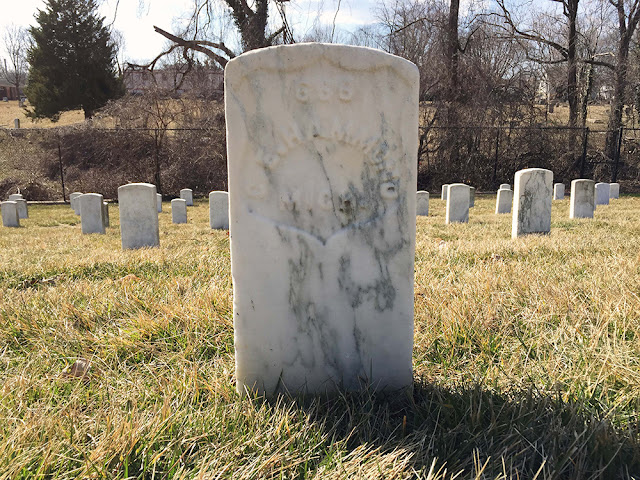 G.E. Hammond is listed by the Philadelphia Inquirer (December 24, 1864, page 1) as having died on the Northern Light.