Frank Muhlberg was born 1832 in Germany.

Frank immigrated to the United States and eventually settled in western Michigan by the time the war broke out.

He stood 5’8” with blue eyes, light hair and a light complexion and was a 29-year-old engineer living in either Muskegon, Muskegon County or Grand Rapids when he enlisted as Fifth Sergeant in Company C on May 13, 1861. (Company C was made up largely of German and Dutch immigrants, many of whom lived on the west side of the Grand River in Grand Rapids. This company was the descendant of the old Grand Rapids Rifles, also known as the “German Rifles,” a prewar local militia company composed solely of German troopers.) He received the Kearny Cross for his participation in the battle of Chancellorsville, Virginia, on May 3, 1863, and was a witness for the prosecution in the court martial of James Ayres, who was absent without leave for two days from the regiment during the battle of Chancellorsville.

He reenlisted on December 21, 1863, at Brandy Station, Virginia, crediting Grand Rapids. He was presumably absent on veteran’s furlough in January of 1864 and probably returned to the Regiment on or about the first of February.

Frank was wounded in May of 1864 (probably May 6) at the Wilderness, Virginia, and was transferred as First Sergeant to Company I, Fifth Michigan infantry upon consolidation of the Third and Fifth Michigan Regiments on June 10, 1864. Franz was promoted to First Lieutenant of Company I in June, commissioned as of February 1, 1864, mustered on August 6 near Petersburg, Virginia, replacing Lieutenant Jerome Ten Eyck, and was wounded a second time on June 16 near Petersburg, Virginia. He was subsequently absent in the hospital in July, again in September, and in fact was back in Grand Rapids in early september when he testified in the pensino application for the mother of Adam Kolb, also of Company C.

Frank was soon back with his company by October and absent with leave from March 4, 1865. He returned to the Regiment sometime in April, and was mustered out on July 5, 1865, at Jeffersonville, Indiana.

After the war Frank eventually returned to Michigan and by 1870 he was living in Laketon, Muskegon County where he was working as a mill hand. He was admitted to the Northwestern Branch, National Military Home in Milwaukee, Wisconsin on July 29, 1873, and discharged from the NMH on February 2, 1874. Frank then returned to Grand Rapids where he was reported as an indigent soldier in December of 1876.

He may very well have been the same “Frank Muhlberg” who was convicted of rape in December of 1878 in Grand Rapids and sent to prison for five years. Released from prison in late 1882 he was living in Grand Rapids in 1890. (This “Muhlberg” was 47 years old -- born in 1831 -- and stood 5’7” with a dark complexion, blue eyes, and black hair.)

In any case, Frank was living in Grand Rapids in 1885, was probably never married and a member of the Old Third Michigan Infantry Association, Grand Army of the Republic Champlin Post No. 29 in Grand Rapids.

Frank was also a member of the German Veteran’s Association of Grand Rapids (on west side of the Grand River in Grand Rapids). On September 15, 1890, “A score or so,” wrote the Democrat, “of German veterans of the late war met in the reading room of the Bridge Street House . . . for the purpose of making arrangements for a turn out on German day, October 6. Julius Fenger acted as chairman of the meeting and Julius Caesar as secretary. The following were appointed a general committee of arrangements: August Schmidt, Henry Schnabel, Julius Rathman, Julius Fenger, Ely Koehler, A. Rash, Frank Muhlenberg, Gustav Landau, Julius Caesar. Ward committees will also be appointed. The intention is to take part in the parade on German day. None but actual veterans of the war of the rebellion and native Germans will be permitted to take part in the parade, and these will be provided with special badges and will march under the United States flag. This is intended as an emphatic declaration of loyalty and patriotism of German citizens. There are about 200 German vets in the city. Veterans from out of town will also be invited to participate. The headquarters of the German Brigade will be at the Bridge Street House. Another meeting will be held next Sunday afternoon at 3 o'clock at Arbeiter Hall to further perfect arrangements.”

By 1890 Frank was boarding at the Ohio House in Grand Rapids. In 1906 Franz was boarding at the home of Mrs. J. Cobb at 14 Broadway Street, reportedly living off his pension, and he took his meals with the Wichtman family at 131 West Division Street.

Frank died of acute alcoholism at 10:00 a.m. on September 17, 1907, at his residence at 14 Broadway in Grand Rapids. According to his obituary in the Herald of September 19, 1907, “He was last seen alive,” wrote the Herald on September 19, “by Mrs. Cobb at 4 o'clock Tuesday afternoon, when he went to his room. Nothing more was heard of him until yesterday morning, when Mrs. Cobb went to the room, finding him stretched full length on the floor, cold and dead.”

The funeral service was held at Platte and Latzek chapel on Saturday at 2:00 pm., and he was buried in the GAR Champlin Post No. 29 veterans lot in Greenwood cemetery: section E lot 73. 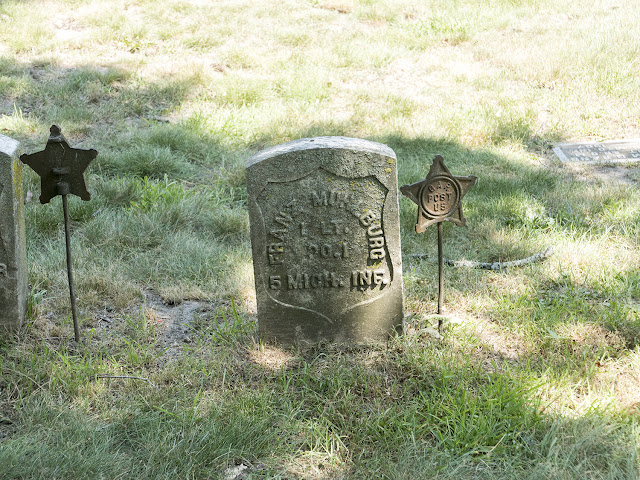