John Brady Spencer was born in 1838 in Jackson County, Michigan.

In 1850 there was a 12-year-old John Spencer, born in Michigan living with his mother Jane (b. 1802 in Nova Scotia) and family on a farm in Ada, Kent County; that same year there was also a 14-year-old John Spencer, also born in Michigan, living with his younger brother David with the Philander Carter family in Jackson, Jackson County. By 1860 John was probably working as a farm laborer and/or living with the Aaron Daniels family in Vergennes, Kent County.

John stood 5’8” with blue eyes, brown hair and a light complexion and was a 24-year-old farmer possibly living in Kent County when he enlisted in Company A on February 26, 1862, at Grand Rapids for 3 years, and was mustered the same day. He was reported sick in the hospital in July and again in October and November. He had probably returned to duty by the time he was taken prisoner on November 30, 1863, at Mine Run, Virginia. He was confined in Richmond, Virginia on December 1, sent to Andersonville, Georgia on March 18, 1864, where he was admitted to the prison hospital on March 23 and was eventually returned to the general prison population.

He was transferred as a prisoner-of-war to Company A, Fifth Michigan infantry upon consolidation of the Third and Fifth Michigan Regiments on June 10, 1864, and was paroled at Jacksonville, Florida on April 28 or 29, 1865.

John was admitted to the hospital in Jacksonville where he died on May 12, 1865, and was buried in Beaufort, South Carolina, National Cemetery: section 41, grave 4676.

No pension seems to be available. 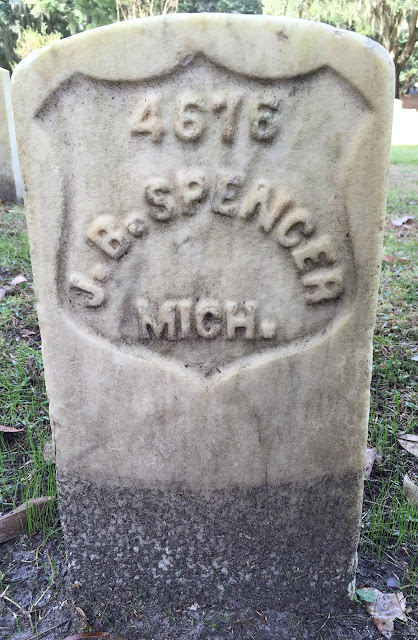