Richard and Mary were married in Ireland and in 1832 immigrated to America first settling in Vermont where their son Patrick was born. Between 1840 and 1843 Richard moved his family westward and first settled in Kent County. By 1850 Richard was working as a blacksmith in Tallmadge, Ottawa County and Charles was living with his family. By 1860 the family had moved to Wright, Ottawa County, where Charles worked as a farm laborer.

Charles was apparently residing in Wright, Ottawa County, was 17 years old, unable to read or write, and stood 5’7” with blue eyes, brown hair and a fair complexion, when he enlisted in Company E on February 11, 1864, at Grand Rapids for 3 years, crediting Wright, and was mustered the same day. He joined the Regiment on March 6, 1864, and was probably sent to a field hospital on or about June 1, suffering from diarrhea. He was transferred on June 7 to Finley general hospital in Washington, DC, but soon recovered and was returned to the Regiment from Finley hospital on June 9, just in time to be transferred to Company E, Fifth Michigan infantry upon consolidation of the Third and Fifth Michigan Regiments on June 10, 1864.

Charles was wounded on June 22 while on picket duty near Petersburg, Virginia, and subsequently died of his wounds on either July 1 or September 13 or 14, 1864, in the Division hospital.

His body was reportedly sent home to Ottawa County where it arrived in Berlin (Marne) on September 22 and buried on September 24 in St. Mary’s cemetery in Wright Township.

No pension appears to be available.

His family was still living in Wright Township in 1870. 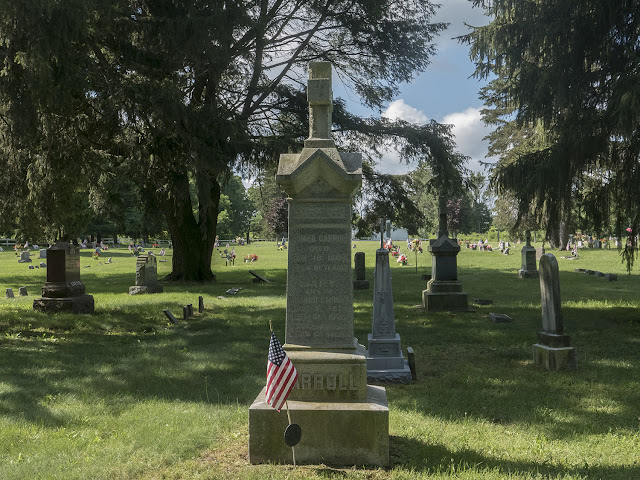