Sometime between 1845 and 1850 the family left New England and moved to Michigan. By 1850 the family (listed as “Calhoun”) had settled in Danby, Ionia County, where Joseph’s older brother George was listed as the head of the household. That same year Joseph was reported as attending school with his siblings and living with his mother and brother George in Danby. By 1860 George (now married to Michigan native Adaline) was living in Lowell, Kent County.

Joseph stood 5’10” with blue eyes, sandy hair and a light complexion, and was a 20-year-old farmer possibly living in Lowell when he enlisted at the age of 20 in Company D on May 13, 1861. (Company D was composed in large part of men who came from eastern Kent County, western Ionia County and Eaton County.) His older brother George apparently served in Company B, 1st Michigan Engineers and Mechanics, and in 1864 his younger brother Charles joined in the 1st Michigan Light Artillery.

George Miller of Company A, and who was from Bowne, Kent County, wrote home in late November of 1861 that Cahoon had “applied for a discharge on account of disability of some sort. I don’t know what, he couldn’t stand it to march, [and] his papers are being made out.” In fact, Joseph was discharged for an inguinal hernia which he had suffered “previous to enlistment,” on December 2, 1861 at Fort Lyon, Virginia, and left for Michigan the next day. On December 4, Miller informed his parents, “I sent a book to you by Joseph Cahoon. He left home here for home yesterday, [and] he must be nearly there [Kent County] now.”

Joseph did indeed return to western Michigan, and by 1863 was reported to be living in Lowell when he registered for the draft in the summer of 1863 but apparently working as a sawyer in Muskegon County. It does not appear that Joseph reentered the service. There is no further record. In fact, it appears that Joseph was a civilian working as a teamster, probably for the army when he died in Memphis, Tennessee and was buried in Memphis National Cemetery: section A, grave 26. 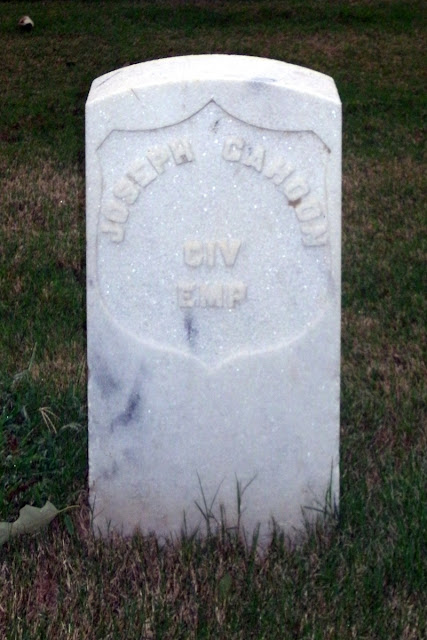