The family left Canada sometime after 1858 and by 1860 William had settled them on a farm Courtland, Kent County, Michigan.

William stood 5’8” with blue eyes, brown hair and a light complexion and was a 31-year-old farmer probably living in Courtland when he enlisted in Company A on August 14, 1862, at Grand Rapids for 3 years, and was mustered the same day. He joined the Regiment on September 18 at Fairfax Seminary, Virginia, and was reported absent sick in the hospital from June of 1863 through July. He eventually returned to duty and was first reported as missing in action May 8, 1864, at the Wilderness, Virginia, and in fact had been taken prisoner on May 7 and confined at Andersonville, Georgia. William was transferred as missing-in-action to Company C, 5th Michigan infantry upon consolidation of the 3rd and 5th Michigan Regiments on June 10, 1864.

On June 29 William was admitted to the prison hospital suffering from consumption and returned to his quarters on November 14. The following day, November 15, he was transferred to Savannah, Georgia where he was paroled on November 20, 1864, and admitted to the Naval School hospital in Annapolis, Maryland on December 4. He was on furlough from the hospital in January of 1865, staying with his brother Captain James Draper in Toledo. On January 18, 1865, Dr. D. B. Sturgeon of Toledo wrote a certification that Draper was suffering from chronic dysentery and unable to leave the city, thus requiring an extension of his furlough.

On February 5, 1865, Dr. Sturgeon wrote to the War Department that William had died on February 4, 1865, in Toledo of chronic dysentery. He was buried in Forest Cemetery, Toledo: 6-5-8.

In 1865 his widow applied for and received a pension (no. 71075). Sarah subsequently remarried to one Gideon Squiers and she filed for a pension on behalf of minor children (no. 106728). By 1870 Sarah was living with her second husband, his children, as well as three of her children from her marriage to William Draper (the children were listed as Draper’s). 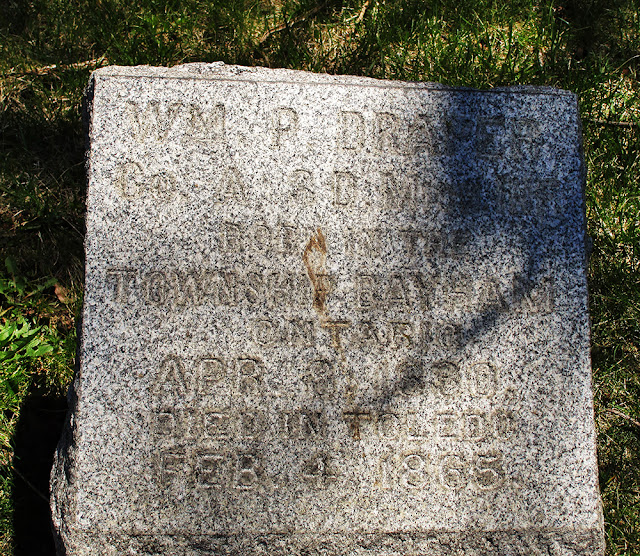