By 1850 Charles was attending school with one Julia Lamonte and living with his family in Barton, Tioga County, New York where his father worked as a carpenter. Charles left New York with his family, and came to western Michigan. By 1860 Charles was attending school with three of his younger siblings, living with his family in Grand Rapids’ 4th Ward, Kent County, and probably working as a farm laborer for a wealthy farmer by the name of Conrad Phillips in Walker, Kent County.

Charles stood 5’9” with blue eyes, brown hair and a light complexion and was 17 years old and residing in Grand Rapids when he enlisted in Company B on May 13, 1861. During the Old Third Michigan Infantry association’s annual reunion in December of 1882, Charles “told how in climbing out, by command, with the rest of the boys upon that festive occasion, [First] Bull Run, he left behind his jacket containing his first month's salary, 11 gold dollars.”

Charles was detached as a pioneer from July of 1862 through November, in the Regimental commissary department from January of 1863 through August, at First Division headquarters in October, and a First Division teamster in November. He reenlisted on December 23, 1863, at Brandy Station, Virginia, crediting Grand Rapids, Third Ward, was presumably absent on veteran’s furlough in January of 1864 and probably returned to the Regiment on or about the first of February. In April of 1864 he was reported with the Brigade wagon train through May (probably as a teamster), and he was on detached service in the ammunition train when he was transferred to Company E, Fifth Michigan infantry upon consolidation of the Third and Fifth Michigan Regiments on June 10, 1864. He remained on detached service through May of 1865, and probably until he was mustered out on July 5, 1865, at Jeffersonville, Indiana.

While it’s possible he returned to his family home in western Michigan it is unclear where Charles settled after the war.

Charles and his wife eventually moved to Grand Rapids where he worked as a fireman. “Charley Swain,” wrote the Democrat on August 2, 1874, “jumped into a creek at Muskegon yesterday morning and rescued an inhabitant from drowning. He formerly resided in Milwaukee, and upon investigation his body was found enclosed in iron bands.”

In January of 1875 it was reported that Swain, “one of the most efficient Democratic workers of the 7th Ward, a brave fireman and worthy citizen, is soon to leave the city and take up residence on a farm near Toledo, Ohio. While we regret his leaving the Valley city, we are glad to know he will emigrate to a thoroughly Democratic State, where the ‘fog horn’ of Governor Allen rallied the faithful to victory. The ‘boys’ of the ‘machine’ propose to supply Charley with an outfit of agricultural implements.”

By 1878, however, he had returned to Grand Rapids where he had resumed his trade of fireman. “Mr. Charles Swain,” wrote the Democrat on May 25, “the gentlemanly foreman, says the rooms [for a new engine house] will be open for the reception of the public generally today, and he, with his brother firemen, desire especially that those who aided them in procuring means to furnish their rooms should look in and see how the money has been expended.”

By 1880 Charles was still working as a fireman and living with his wife on Bronson Street in Grand Rapids’ 4th Ward. He was still in Grand Rapids in 1882 but by 1892 was living in Lucas County, Ohio, when he provided an affidavit in the pension application for Rolandus Freet who had also served in the Old Third during the war. That same year he also applied for and received a pension (no. 830060). By 1895 Charles had moved back to Toledo. In 1900 Charles was working as a carpenter and living with his wife Clarinda in Toledo’s 10th Ward, Lucas County, Ohio.

He was a member of the Old 3rd Michigan Infantry Association, Grand Army of the Republic Custer post no. 5 in Grand Rapids and an active Democrat. Charles died on October 25, 1905, probably in Toledo, Ohio, and was buried in Woodland cemetery, Toledo. 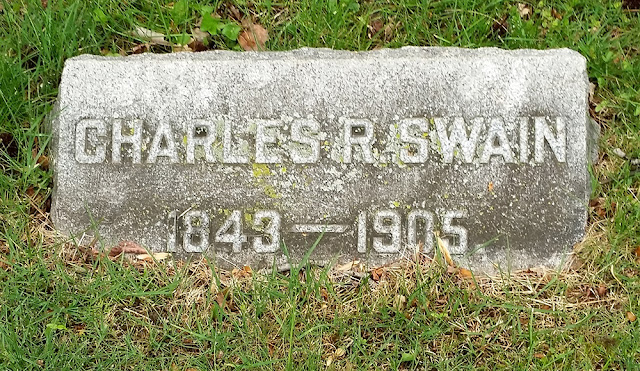 I found this post in a search for my great great grandfather, also Charles R(andolph) Swain.
While this is obviously a different Charles R Swain, I was struck by the overwhelming similarities between the two. Both were born to parents from NY around 1843, served with distinction in the Civil War, were involved in firefighting, and were active in civic affairs. How odd that two men born with the same name at the same time would follow such similar paths!