His parents were married in November of 1831 in Plymouth, Wayne County, Michigan. James’ father died in 1845. By 1850 Jane was the head of the household and James was living with his other and family in Canton, Wayne County. Jane married Charles Latham in Easton, Ionia County, Michigan, in June of 1855, and they settled in Porter, Van Buren County. Charles Latham died the following year and Jane moved back to Ionia County. On December 28, 1855, James married Mary Terrell, in Kalamazoo, Kalamazoo County.

James and Mary resided in Kalamazoo for a short while before moving in with James’ mother in Ionia County, eventually settling on 60 acres in Gratiot County, where James worked as a farmer. According to the testimony of his mother, James and Mary separated about a year or so after their marriage -- sometime in late 1856 or early 1857 -- and he returned home to Ionia County to live with his mother, working as a common laborer. His wife returned to her family home in Kalamazoo. In early January of 1861 James filed a bill of complaint against Mary, seeking a divorce -- no specifics were given -- and the divorce was granted on May 15, 1861.

In 1860 his mother was head of the household and owned some $1000 worth of real estate and living in Easton, Ionia County.

James stood 5’8” with hazel eyes, brown hair and a dark complexion, and was a 26-year-old farmer possibly living in Ionia County, Michigan, when he enlisted in Company C on May 13, 1861. He was one of three dozen or so men who did not leave Grand Rapids with the Regiment, and was subsequently reported as having deserted on June 13, 1861 -- the day the Regiment left for Washington. Apparently he recovered from his illness but did not join the Regiment in the field and instead returned to Ionia County.

James never joined the 3rd Michigan in Virginia, and, although he was never reported as being discharged (for disability or otherwise), he enlisted on August 6, 1861, in Company B, 16th Michigan infantry (also known as Stockton’s Independent Regiment) at Ionia, Ionia County for 3 years, and was mustered on September 7 at Detroit.

The 16th Infantry was organized at Plymouth and Detroit from July to September of 1861, and left Michigan for Washington on September 16 and went into camp at Hall’s Hill outside of Washington until March of 1862. It moved to Virginia Peninsula in late March, participated in the siege of Yorktown, the battle of Hanover court house, the Seven Days before Richmond in late June, Savage Station, Malvern Hill and was on duty at Harrison’s Landing until August 16. 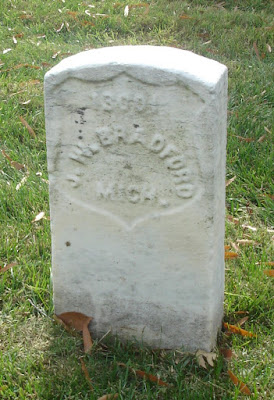 While serving with the 16th Michigan James was reported missing in action at the battle of Gaines’ Mill, Virginia, from June 27, 1862 through July, and by November he was in the hospital at Baltimore, Maryland, and then at Georgetown, DC, in December; he remained hospitalized through August of 1863. He eventually recovered his health and had rejoined the regiment by the time he reenlisted on December 23 1863, at Rappahannock Station, Virginia, crediting Orleans Township, Ionia County; he gave as his place of residence Ionia County.

In January of 1864 he was on veterans’ furlough, at his home in Ionia County, and probably returned to the Regiment on or about the first of February. In any case, that same month he was listed as back in the hospital. He eventually returned to his Regiment and was shot at the battle of Point Lookout, Maryland, probably sometime in early May. (This remains unconfirmed; the records might have confused his admission to the hospital at Point Lookout with the battle there since as far as is known the Sixteenth never fought at Point Lookout.) The regiment participated in the battles of the Wilderness and Spotsylvania in May of 1864 as well as in all the movements of the Union forces southward to the siege of Petersburg, Virginia.

James was apparently serving with the regiment when he was shot in one of his legs during the battle of Hatcher’s Run, Virginia, on February 6, 1865. He was hospitalized, probably at either the U.S. general hospital at (probably) Point Lookout or Annapolis, Maryland, where his leg was amputated. He died of his wounds on February 17, 1865, at Point Lookout and was buried in Point Lookout National Cemetery.

His mother Jane received a dependent mother’s pension (no. 62,273), dated January of 1866, and drawing $8.00 per month; she reapplied in 1886 and even though the Special Examiner recommended she be dropped from the pension rolls, in fact her pension was continued.