His parents settled in Michigan in 1842 or 1844. By 1850 Peter was working as a sawyer in Muskegon, at that time a part of Ottawa County, and Nelson was attending school. By 1860 Nelson was a laborer in the vicinity of Mill Point, Spring Lake, Ottawa County living with his family.

Nelson stood 5’9” with brown eyes, fair hair and a light complexion and was a 19-year-old laborer living in Muskegon County (or perhaps in Fairview, Mason County) when he enlisted with the consent of his parents in Company H on May 13, 1861. (Company H, formerly the “Muskegon Rangers,” was made up largely of men from the vicinity of Muskegon and Newaygo counties.) Nelson was shot in the left arm on August 29, 1862, at Second Bull Run, the musket “ball passed through fleshy part of arm, about midway between shoulders & elbow, granulated and healed kindly.” According to his medical records he subsequently “suffered pain and loss of sensation in the little finger and one-half of the ring finger” and after about three weeks “the pain extended over the whole hand front & back.”

He was first hospitalized at Emory hospital in Washington, DC, and eventually transferred to West’s Building hospital in Baltimore, Maryland, and continued to suffer lack of sensation in the two digits but continuing, constant pain in his hand, indeed “leaving the arm helpless and useless and forcing him to handle it like a broken arm.” Apparently the ulnar never was torn by the musket ball and then became inflamed. He remained hospitalized until he was discharged on January 24, 1863, at Baltimore, for disability resulting from his wounds.

Nelson was probably still in Maryland in May of 1863 when he applied for and received a pension (no. 16928), drawing $8.00 per month and $72.00 per month by 1929. By the summer of 1863 Nelson was working as a laborer and living at the Hotel Baylas on 463 New Jersey Avenue in Washington, DC, when he registered for the draft; his prior service in the 3rd Michigan duly noted in the record.

By 1908 Nelson and Alice had moved on to Los Angeles, California. In 1910 Nelson was working as a mail carrier and he and Alice were living at 715 Frary Street in El Monte, Los Angeles County, California. In 1915 and 1917 he was residing at 727 S. Ivy Street in Monrovia, Los Angeles County, California. By 1920 he was a widower living at 316 Hillcrest in Monrovia; also living with him were a niece and nephew: Indiana natives Louella and Frank Ulrey (?). Nelson married German-born widow Mrs. Anna Dunham (b. 1858), in San Bernardino, California, on January 18, 1926.

Nelson died January 2, 1929, at Monrovia, and was buried in Forest Lawn, Glendale, California: sec. D, lot 23, next to his wife Alice. 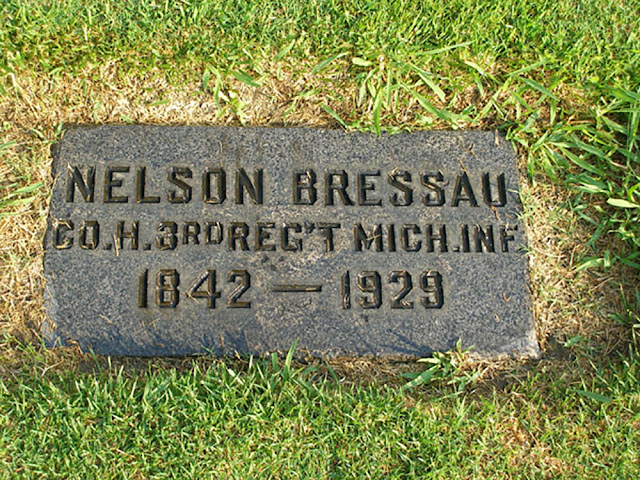