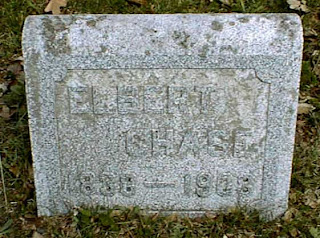 Elbert Chase was born around 1838 in (probably) Lyon, Oakland County, Michigan, probably the son of Bela (1802-1859) and Orilla (Whipple Miller).
New Hampshire native Bela and Orilla (or Aurilla) were probably married in New York before 1823, and sometime before 1830 moved westward settling in Detroit, Wayne County, Michigan. By 1830 Bela and his family had settled on land in Lyon, Oakland County, where he farmed for some years. Bela apparently remarried a second time to a woman with the last name of Buck; he married a third time to a young woman named, Pennsylvania native Minerva Shute (b. 1830) and by 1850 they were living on a farm in Lyon, Oakland County. Bela apparently moved his family to the western side of the state and he died in 1859 in Alpine, Kent County. By 1860 Elbert was a farm laborer working for and/or living with the Elisha Chambers family in Alpine, Kent County.

Elbert stood 5’7” with blue eyes, brown hair and a light complexion, and was 22 years old and probably still living in Kent County (perhaps in Grand Rapids) when he enlisted in Company K on May 13, 1861. He was reported as a pioneer, probably detached to the Brigade, from July of 1862 through October. In any case, he reenlisted on December 23, 1863, at Brandy Station, Virginia, crediting Walker, Kent County, and was presumably absent on veteran’s furlough, probably in Michigan, in January of 1864.

Elbert probably returned to the Regiment on or about the first of February. He was transferred to Company B on January 31, 1864, and by April was an orderly at Brigade headquarters. He was absent sick when he was transferred to Company E, Fifth Michigan infantry upon consolidation of the Third and Fifth Michigan Regiments on June 10, 1864, but he soon returned to duty and was wounded slightly by a gunshot (minie ball) to the right shoulder on June 22, 1864 near Petersburg, Virginia.

On June 28 he was admitted to First Division hospital at Alexandria, Virginia, and furloughed from the hospital on August 15, 1864. He was readmitted to a hospital on September 24, furloughed again on October 15, readmitted on November 16, and returned to duty on November 28. Elbert’s wound apparently had not healed properly and he was admitted to Third Division hospital, Second Corps at City Point, Virginia, on February 5, 1865, and returned to duty on March 27.

He was transferred to the Veterans’ Reserve Corps on either May 2 or June 14, 1865, and was either mustered out of service on July 18, 1865 or discharged on September 18, 1865 from the Two hundred thirty-ninth company, First Battalion, VRC, at Washington, DC. (The VRC was made up of men who while ambulatory were generally incapable of performing regular military tasks due to having suffered debilitating wounds and/or diseases and were assigned to garrison the many supply depots, draft rendezvous, camps, forts, prisons, etc. scattered throughout the northern cities, thus freeing able-bodied men for regular military duty.)

After his discharge from the army Elbert returned to Michigan and settled in Alpine, Kent County.

He was living in Alpine when he married Ermina Moore on October 3, 1865.

Elbert was still living in Alpine in 1866. By 1890 he was residing in Green Oak or Brighton, Livingston County, in Green Oak in 1894 and was perhaps living in Hastings, Barry County by about 1900.

He was probably a member of Grand Army of the Republic Stansell Post No. 333 in South Lyons, Oakland County.

Elbert was married a second time to one Esther J. on January 11, 1877. (She claimed after his death that he had only been married the one time.)

Elbert died on January 13, 1908, presumably at his home in Livingston County and is buried in Green Oak Plains (also known as Holden) cemetery in Green Oak township.

In February of 1908 his widow was living in Brighton, Livingston County when she applied for and received a pension (no. 640943).
Posted by Steve Soper at 6:35 AM