Benjamin Collins married Eliza and by 1827 had settled in New York when their daughter Mahala was born. By 1850 Barnett was attending school with three of his older siblings and living with his family on a farm in Dix, Chemung County, New York. By 1860 Barnett (“Barney”) was working as a farm laborer and living with his father in Dix, Schuyler County, New York. Barnett left New York and moved west, eventually settling in western Michigan by the time the war broke out.

Barnett stood 5’8” with blue eyes, dark hair and a light complexion, and was an 18-year-old laborer probably living in Ionia County when he enlisted with the consent of the Justice of the Peace in Company E on May 13, 1861. (Company E was composed in large part by men from Clinton and Ingham counties, as well as parts of Ionia County.) He was wounded on June 17, 1862 near Richmond, Virginia, absent sick in the hospital in July and August, and was discharged on September 29 at Upton’s Hill, Virginia, for a gunshot wound to the left arm preventing “the free use of it through adhesions to the superficial and deep facia.”

It is unknown if Barnett ever returned to Michigan.

He was apparently living in New York when he enlisted as a private on September 9, 1864 in Company A, 141st New York infantry. (This regiment had been recruited in Chemung, Schuyler and Steuben counties in 1862.) It is quite likely that Barnett joined the regiment in Atlanta, Georgia, where it remained until November 15, when it started off with Sherman’s forces on the march to the sea. The 141st took part in the siege of Savannah and in 1865 participated in the campaign through the Carolinas. After confederate General Joe Johnston's surrender it marched on to Washington, where took part in the grand review. Barnett was mustered out with the regiment on June 8, 1865, at Washington, DC. Barnett returned to New York after the war.

In 1873 Barnett applied for and received a pension (no. 137617) for service in both Michigan and New York regiments.

Barnett died on June 30, 1910, probably at his home in Watkins, Schuyler County, New York, and was buried in Glenwood cemetery in Watkins (his wife and daughter are also buried with him). 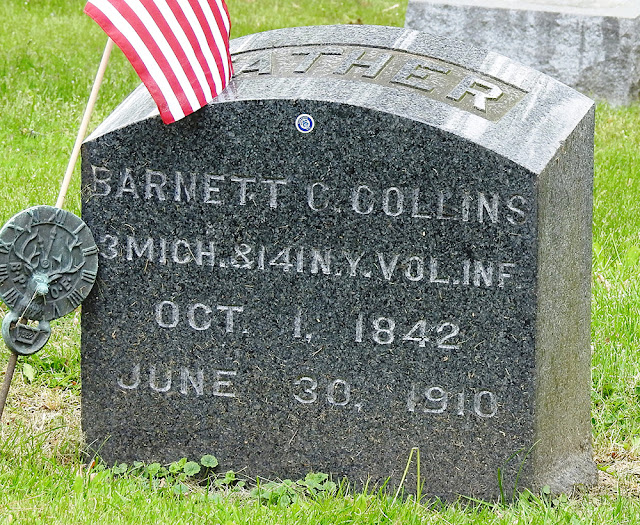