Amos and Hannah were married in a Quaker ceremony in Adams, Massachusetts (where Hannah had been born), on November 11, 1813 and settled in Berlin, New York (Amos’ birthplace) where they resided for some years. By 1827 they had moved (back) to Adams, Massachusetts, living there until at least 1839.

In 1850 William was possibly working as a laborer and living in Adams, Massachusetts but he moved his family to Michigan sometime before 1855 when Amos reportedly died in Lapeer County, Michigan. By 1860 William and his family were living in Grand Haven, Ottawa County, where he was working as a carpenter.

William stood 6’0” with blue eyes, brown hair and a light complexion, and was 39 years old and probably living in Tallmadge, Ottawa County when he enlisted in Company I on May 13, 1861. (Company I was made up largely of men from Ottawa County, particularly from the eastern side of the County.) One source reported that by the middle of August of 1861 William and Hiram Bateman (also from Ottawa county and in the 3rd Michigan) were working in the regimental hospital tending the sick. “We understand,” wrote the Grand Haven News in mid-August, “that Mr. Bateman and Mr. Comstock, both from Lamont, are in the regiment’s hospital, on the camping ground, detailed from their company to aid in the care of the sick and wounded, so that our own acquaintances will receive and prepare for the sick such comforts as have been sent from this village.”

While many men served at one time or another as nurses in hospitals during the war, William may in fact have requested to be detached for just such work. In his obituary written many years later, it was reported that “When in May, 1861, the call came for service for his country, he was among the first to respond, though he shrank from the thought of the possibility of taking the life of his fellow man. God, knowing his heart, soon opened the way for him to serve in ministering to the comfort of the wounded, the sick and the dying, which he did with equal gladness, whether friend or foe.” Reuben Randall, also of Company I, wrote that William was reported as a nurse in the hospital from June 2, 1862, to July of 1862, and on detached service in August, probably as a nurse.

In September he was still absent as a nurse in the hospital, and, according to the Regimental monthly returns, he was discharged “by order” on October 25, 1862, at Edward’s Ferry, Virginia, although his service record reports him as discharged on March 25, 1863, at Rhode Island for chronic rheumatism and varicose veins.

According to Bob Bosch, chronicler of the Allendale civil war veterans, William eventually settled on what is now 56th Avenue about 1/2 mile north of M-45 in section 23.

“His last years,” one source noted, “were full of vigor and activity until” the last weeks of June of 1909. He reportedly “became overwearied, which with the excessive heat of the weather rapidly consumed his powers and brought the end.

William was a widower living in Allendale, when, “as the night turned toward the morning,” on July 15, 1909, “he quietly slipped away to be with God.” “He was converted,” noted one obituary,

at the age of sixteen years, living seventy-two years abandoned to Christ, from whom he drew his life and built the stanch character that made him peculiar among men, in understanding and knowledge of the Scriptures, in love, in purity of thought and lifer, in tender compassion for the needy, the unfortunate or erring, which led to rigid self-denial, abundant charity and acts of helpfulness with joyfulness. His was by no means an eye-service but a deep and fixed principle underlay all. Large was his mantle of charity. Of him it may well be said, “Of whom the world was not worthy.” Christ was the source of supply for all his needs, his rock and place of safety.

Funeral services were conducted by the Rev. C. S. Rennels using text from Revelations 7:17 and William was buried in Allendale cemetery. 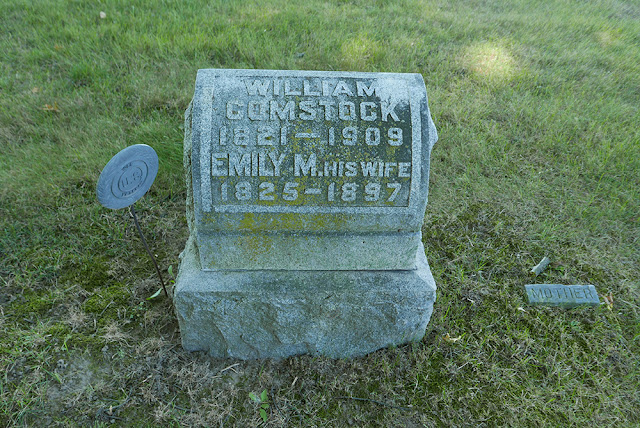