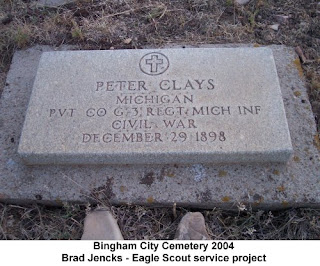 Peter Clays was born 1838 in Bavaria, Germany.
Peter left Germany, and came to America, eventually settling in central Michigan. By early 1861 he was probably living in Lansing or Ingham County when he became a member of the Lansing militia company called the “Williams’ Rifles”, whose members would serve as the nucleus of Company G.

He stood 5’8” with brown eyes, dark hair and a dark complexion, and was 21 years old and working as a watchman probably in Ingham County when he enlisted in Company G on May 10, 1861. He was wounded slightly in the ear on May 31, 1862, at Fair Oaks, Virginia. According to Homer Thayer of Company G, Peter was already back in camp by June 3. In August he was reported missing in action after the battle of Second Bull Run on August 29, and, in fact had been wounded in the left foot. According to Assistant surgeon Walter B. Morrison, Peter was shot, “the ball entering on the plantar surface of the great toe of the left foot, traversing its entire length and making an exit at the posterior extremity of the heel, carrying away a portion of the posterior extremity of the first phalanx of the toe with a portion of the head of the first metatarsal bone producing anchylosis of the joint also fracturing the posterior extremity of the oscalcis producing tenderness of the heel.”

Homer Thayer wrote to the Lansing Republican on September 2, 1862, that Peter was a Corporal, and by October he was reported absent sick in the hospital. As of October 6 Peter was convalescing at College hospital in Georgetown, DC, and preparing to go home on sick furlough.

Peter remained hospitalized through January of 1863, was still Corporal in March of 1863 and discharged on March 22, 1863, at Camp Pitcher, Virginia, for a gunshot wound.

It is not known if Peter returned to Michigan and apparently moved out west after the war.

He and Sarah were both still living in Salt Lake City when they were divorced on January 7, 1877 or 1878, although the parting was apparently amicable. According to the decree, “they have mutually come to the conclusion that their welfare and happiness require that they should be separated frrom each, as they cannot live together in peace and union” and further “that they have mutually agreed as to the division of their property, as also to the custody and control of their . . . children.”

Peter was working as a miner and living with his wife at 24 Church Street in Salt Lake City, Utah in 1892 when their son Charley was born. Peter was living in Bingham Canyon, Salt Lake County, in May of 1895 and in January of 1898.