Frank Marty was born on March 13, 1839, in Switzerland, the son of Frank and Brigada Miller.

Frank immigrated to the United States and eventually settled in Muskegon, Muskegon County sometime before the war broke out.

He stood 5’7” with blue eyes, brown hair and a dark complexion and was 22 years old and probably working as a laborer in Muskegon in 1861 when he enlisted as wagoner in Company C on May 13, 1861. He was employed as a teamster from July of 1862 through December, and serving with the 3rd Brigade wagon train from January of 1863 through July. Theodore Castor, also a member of Company C and a good friend, thought highly of Martig. They tented together along with Rudolph Nagel and Sergeant Dietrich all of Company C. Castor also thought Martig a superb “scrounger,” and wrote in later years that because of his job as a company wagoner, he “could get into any wagon in the Brigade. He done the stealing and stole anything at night that he could lay his hands on from the officers and get it in camp. . . .”

In August of 1863 Frank was reported AWOL, but he had probably returned to duty by the time he reenlisted on December 21 at Brandy Station, Virginia, crediting Byron, Kent County, but listing Muskegon County as his residence. He was presumably absent on veteran’s furlough in January of 1864 and probably returned to the Regiment on or about the first of February. In May of 1864 he was reported at Brigade headquarters, probably as a teamster, and was still on detached service when he was transferred to Company I, 5th Michigan Infantry upon consolidation of the 3rd and 5th Michigan Regiments on June 10, 1864. Frank remained detached from July through October, by November he was a nurse in the City Point hospital, Virginia, and in December he was working in the Quartermaster department. He was working as a wagoner in February of 1865, was reported with the 3rd Division wagon train in March and April, and was mustered out on July 5, 1865, at Jeffersonville, Indiana.

After the war Frank returned to Michigan and eventually settled in Allegan, Allegan County where he probably lived the rest of life working for many years as a farmer. He was married to German-born Margaret or Margaretha (1848-1919), and they had at least three children: Joseph E. (1870-1900), Frank and Cecil.

In 1890 Frank was living in Allegan, Allegan County, when he received a pension (no. 868841). He was a member of the Old 3rd Michigan Infantry Association.

At one point in July of 1881, Frank and several other prominent German farmers from Allegan County traveled back to their birthplaces in Switzerland and Germany, hoping, wrote the Grand Rapids Eagle on July 29, to induce “quite a large number of wealthy farmers there to move to Western Michigan. They think they could do no greater service for their old neighbors.” (Sometime around 1881 Frank witnessed the pension application of John Scheid, another former member of the Old Third.)

Frank died of chronic nephritis on April 5, 1917, in Allegan, and was buried in Oakwood cemetery in Allegan: block 291.

A week after his death his widow applied for and received a pension (no. 840117). 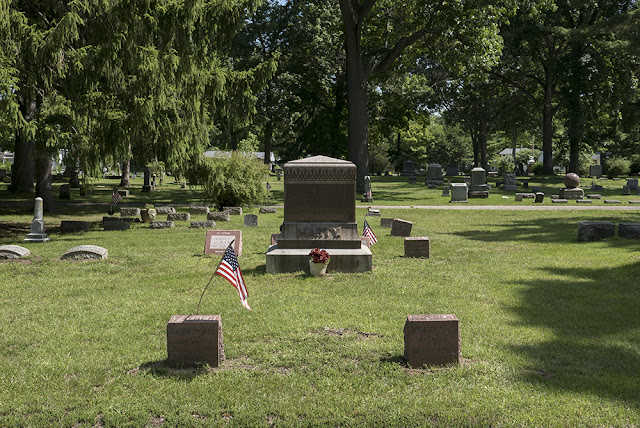