John was born in Scotland and immigrated to the United States where he married New York native Sarah sometime before 1834, probably in New York. They resided in New York for many years and by 1850 William was attending school with six of his older siblings and living with his family on a farm in Salisbury, Herkimer County. Sometime after 1851 his family left New York and settled in Michigan. By 1850 William was attending school with four of his siblings and living with his mother who was farming in Walker, Kent County.

He stood 5’9” with blue eyes, brown hair and a light complexion and was a 19-year-old farmer still living in Walker when he enlisted in Company K on February 9, 1864, at Grand Rapids for 3 years, crediting Muskegon, Muskegon County (listing his residence as Walker), and was mustered the same day. He joined the Regiment on March 1 at Camp Bullock, Virginia, was wounded on May 12, 1864, at Spotsylvania, Virginia, and subsequently hospitalized, possibly in Alexandria, Virginia. He was still absent in the hospital when he was transferred to Company F, Fifth Michigan infantry upon consolidation of the Third and Fifth Michigan Regiments on June 10, 1864, and he remained absent until he was discharged on June 28, 1865, at Sickles hospital in Alexandria.

By 1870 William was working as a farmer and with his wife and two daughters in Wyoming, Kent County (Sarah was living just a few houses away). By 1880 he had moved to Dayton, Newaygo County and was living in Fremont, Newaygo County in 1890 and 1900. Indeed he spent the remainder of his life in Fremont.

William died of nephritis in Fremont on December 25, 1915, and was buried in Maple Grove cemetery in Fremont: block 3-76. 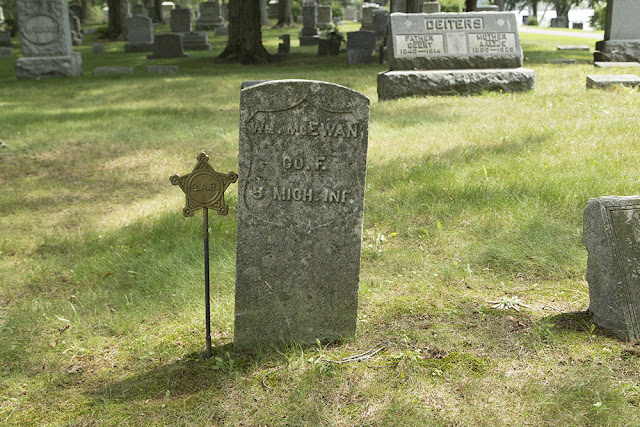