He was listed as a teamster from July of 1862 through January of 1863, a teamster with the 3rd Brigade wagon trains from February through July, reported as AWOL in August, and was at the 1st Division headquarters from September 21 through November, probably working as a teamster.

On December 23, 1863, he reenlisted as a wagoner at Brandy Station, Virginia, was on veteran’s furlough in January of 1864 and probably returned to duty on or about the first of February when he rejoined the Brigade trains.

By 1870 Michael was working as a farmer (he owned some $2,500 worth of real estate) and living with his wife and son in Polkton, Ottawa County; also living with him were his parents (?) Thomas and Mary McCarthy and 8-year-old Peter (born in New York). Michael’s property was located near the corner of 88th Avenue and Arthur, approx, 1/8th of a mile east of the intersection on the north side of Arthur in section 20. Michael ‘s son Michael was born in Polkton, Ottawa County in September of 1872.

He was a member of the Old 3rd Michigan Infantry Association.

Michael was killed in railroad accident on May 13, 1872, probably in western Michigan and was buried in St. Mary’s cemetery in Wright Township, Ottawa County.

In 1903 his widow, who had remarried a Mr. Lillie, was living in Michigan when she applied for a pension (no. 784222) but no certificate was granted. 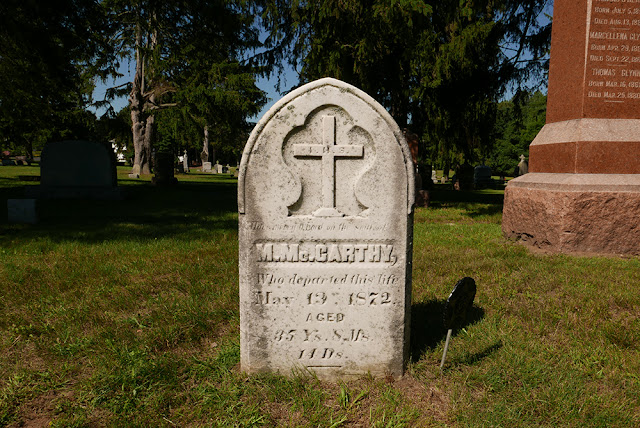