Albert Burton Towne was born in June 7, 1842, in Clinton County, New York or in Michigan.

Albert, who stood 6’1” with gray eyes, brown hair and a light complexion, was discharged (for reasons unknown) from a military unit called “Duboises” Artillery on September 20, 1861. This unit may also have been part of the Kane County Independent Illinois Company of Cavalry. Furthermore, he also appears to have served in Company H, 11th Illinois Cavalry.

In any case Albert was 21 years old when he reentered the service in Company I, 3rd Michigan Infantry on February 24, 1862, at Grand Rapids for 3 years, and was mustered the same day.

He returned to Michigan where he reentered the service on March 10, 1863 in Company H, 9th Michigan Cavalry, probably at Coldwater, Michigan, where the regiment was being formed between January and May of 1863; and was promoted to Corporal on April 11, 1863. If so, Albert probably never joined the 9th Cavalry but was instead transferred on May 1, 1863 to Battery L, 1st Michigan Light Artillery. The battery was organized in Coldwater and mustered into service on April 11, 1863, and left the state for Covington, Kentucky on May 20. It remained on duty at Covington until June 4 when it moved to Camp Nelson and then on to Mt. Sterling on June 12. It participated in numerous operations through the east Tennssee area during the second half of 1863. Albert was promoted to Sergeant on September 13, 1863.

The regiment was at the Cumberland Gap by the end of 1863 and remained on duty there until June of 1864 when it moved to Knoxville where it remained until August 15, 1865 when it was ordered to Jackson, Michigan.

Albert was mustered out as Sergeant with the regiment on August 22, 1865, at Jackson, Jackson County. (Austin Dibble, who had also served in the 3rd Michigan Infantry would also reenter the service in the 9th Michigan Cavalry and he, too, would be transferred to Battery L, 1st Michigan L.A.) After the war Albert returned to Michigan. By 1880 Albert was working as a farmer and living with his wife Clara and their two children in Monterey, Allegan County, and was probably living in Hillside, Monterey Township, Allegan County in 1883 and 1885, and 1890. (There was a civil war veteran named Alberton Towne living in Whitehall, Muskegon County in 1894.)

Albert died at his home on the corner of Lincoln and Wood streets in Snohomish on April 15, 1914,. The service was held at the Methodist Church and he was buried in the GAR Cemetery in Snohomish: row 14.

In 1914 his widow was residing in Washington state when she applied for and received a pension (no. 779498). 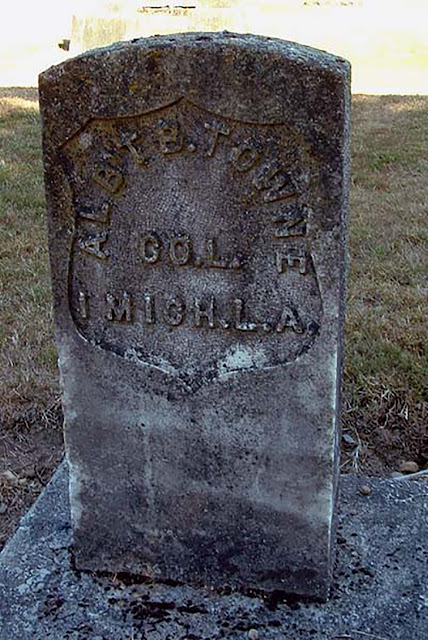