Massachussetts native John married New York-born Hannah in about 1811. Porter came to western Michigan with his family in the 1830s, living variously in Kent and Ottawa counties. By 1850 he was living with his parents on their farm in Tallmadge, Ottawa County.

He stood 6’1’ with blue eyes, light hair and a fair complexion and was a 31-year-old lumberman probably living in Spring Lake, Ottawa County or possibly in Indian Creek, Alpine Township, Kent County when he enlisted in Company H on November 18, 1861, at Grand Rapids for 3 years, and was mustered December 23 at Detroit. He was absent sick from August of 1862 through July of 1863, reported wounded in the leg on July 2, 1863, at Gettysburg and subsequently hospitalized in Philadelphia.

Porter returned to duty and was wounded in the left leg on November 27, 1863, at Mine Run, Virginia. Porter was subsequently hospitalized at Chesapeake hospital in Fortress Monroe, Virginia, and then transferred to Annapolis, Maryland. His wife and several children were on relief in Zeeland, Ottawa County in late 1863.  He reenlisted on December 24, 1863, at Brandy Station, Virginia, crediting Muskegon, Muskegon County, but listing Ottawa County as his place of residence.

Porter was presumably absent on veteran’s furlough in January of 1864, probably at home in Ottawa County, and probably returned to the Regiment on or about the first of February. He was slightly wounded in the right arm in early May, subsequently hospitalized and was possibly still absent wounded when he was transferred to Company A, 5th Michigan infantry upon consolidation of the 3rd and 5th Michigan Regiments on June 10, 1864. He was mustered out on July 5, 1865, at Jeffersonville, Indiana.

Porter was killed when struck by a train on September 11, 1886, in Ashland, Newaygo County, and was buried in Ashland cemetery. 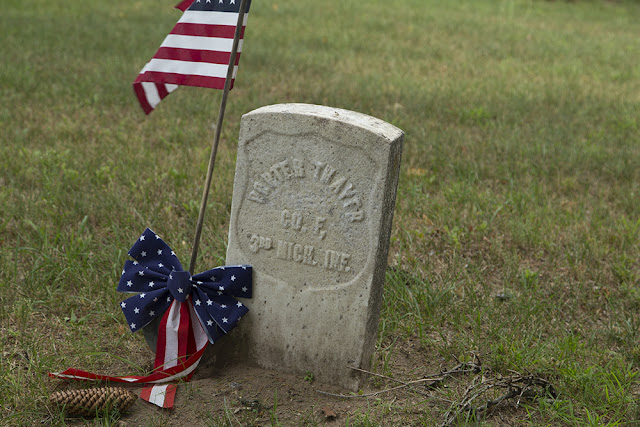