Stephen Decatur Thompson was born on December 27, 1839, in Madison County, Indiana, the son of New York natives Leonard Thompson (b. 1810) and Amy Ferguson.

Stephen’s parents moved to Indiana sometime before 1838 and resided there for some years. Between 1844 and 1846 they moved from Indiana to Ohio and by 1849 had moved to Michigan, probably Grand Rapids, Kent County. In 1850 Leonard was working as a blacksmith in Grand Rapids where Stephen attended school with his siblings. According to one source, around 1850 Leonard left Grand Rapids and went west to look for gold in California, but found cholera instead and perished somewhere in the Rocky Mountains; Stephen’s mother died about the same time. Stephen went to live with the George Jenny family and in 1852 Jenny moved to Newaygo County looking for work, which he found with the Brooks construction company. Stephen also took a job with Brooks, but after a short time he went to work at the Big Red Mill.

Stephen stood 5’4” with gray eyes and a dark complexion and was 21 years old and working as a laborer and butcher, probably in Newaygo County, when he enlisted as Fourth Corporal in Company F on May 13, 1861. He was shot in the left forearm on August 29, 1862, at Second Bull Run. In his pension affidavit for General Israel C. Smith, who had been Captain of Company F at the time, Thompson testified that he saw Smith get hit in the back of his right shoulder, and he remembered this distinctly because he was standing by Smith’s side and was himself “wounded at almost the same instant, and these words passed between us: On receiving my wound ‘I said Captain I am shot’. [Smith] turned practically around towards me, and exclaimed ‘My God I am shot too.’’”

According to Wallace W. Dickinson of Company K, Thompson was promoted to Sergeant for his “gallant conduct” during the action at Second Bull Run. As of early October of 1862 Stephen was a patient in the Presbyterian church hospital in Georgetown, DC, and he remained hospitalized until discharged for disability on December 13, 1862, at New York or Newark, New Jersey.

Stephen returned to Newaygo following his discharge from the army and in 1863 entered into a partnership with his former army comrade, Wallace Dickinson in Newaygo, and they engaged in the business of mining marl in Pennoyer Creek and burning it in a kiln to recover the lime and thus manufacture builder’s lime. However, Dickinson reentered the army in July of 1863, and presumanly the business partnership was dissolved. That summer when he registered for the draft, Stephen was single working as a clerk in Muskegon; his prior service in the 3rd Michigan duly noted in the record.

They soon moved to Big Rapids, Mecosta County, where Stephen opened a restaurant. By 1870 Stephen was working as a saloon keeper (he owned $1000 worth of real estate) and living with his wife and children in Big Rapids’ 1st Ward, Mecosta County.

Apparently Stephen found the restaurant business unsuitable and returned to Newaygo by 1874 where he was employed by the Simmons grocery store in Newaygo as a “silent partner.”

Soon after returning to Newaygo Thompson became sheriff of Newaygo County in 1876, and on October 26, and according to the Democrat, he “arrested one Ezra Wright and William Mapes last evening, whom suspicion rests upon having burned the new church building in Ashland [Newaygo County] the 23rd inst.”

In 1877 he purchased the grocery store outright, and engaged in this business until 1898 when he turned the store over to two of his sons, Lou and Will, so that he could devote more time to a wood product business, and in 1900 he became involved in the Newaygo Portland Cement company. He was residing in Newaygo in 1879, 1881, 1884-85, 1889, 1891, and 1895. By 1900 Stephen was a merchant living with Delia and three of their children in Brooks. In fact, Stephen lived in Newaygo most of his postwar life.

In 1904 Adelia died at the home of her daughter, Mrs. B. McGregor, in Michigan City, Indiana. According to her obituary,

Three weeks ago today Mrs. Thompson left home for a visit with her daughter in Michigan City, and her friends, knowing her physical condition, advised her not to go. Thinking that she would have rest while there, she decided to go. She was in her usual health, even better than that, until on Thursday last, she was seized with a relapse, or rather a second attack of la grippe, and while no fears were felt by her friends, her husband was sent for and joined her on Saturday. The physician attending her assured her friends that she was in no danger whatever, even as late as two o’clock p.m. of the day of her death, which occurred at seven o’clock last Monday evening; so suddenly that there was no time to summon a physician.

[She] was the daughter of William and Clarinda Bennett, and was born in Mt. Morris, N.Y., Sept. 7, 1848. In 1862 with her parents she came to Grand Rapids and the year following moved to Newaygo, where was married to Stephen D. Thompson in 1866. With the exception of a few years spent in Big Rapids, Mr. and Mrs. Thompson have resided in Newaygo since their marriage. Four children, three sons and a daughter, were the fruits of their marriage, all of whom, together with her husband, survive her. Mrs. Thompson was a noble Christian woman, a leader in society, church and social affairs, and to her ambition to aid in every good cause and to her devotion to duty may, perhaps, be partially attributed to her fatal illness. Many times when nature called for rest she has persisted in discharging her duties to her church and the Chapter of the O.E.S., of which she was the Worthy Matron. No charity, no public or private enterprise that needed her assistance was ever refused. Her wonderful energy and executive ability were ever at the command of those in need, and many times she responded to the demands made upon her when her friends warned her that she could not endure the expenditure of health and strength. She was a devoted wife, a loving mother, a Christian in the broadest sense of the word, and not alone her family, but the entire community, is stricken with grief at the taking away of one whom all loved and respected. The funeral will be held at the home at 2 o’clock p.m. today, Rev. Sidney Beck, of Grand Rapids, officiating.

He was a member of the 3rd Michigan Infantry Association, as well as the Grand Army of the Republic Samuel Judd Post No. 133 in Newaygo, and he attended the 1889 reunion at Gettysburg, Pennsylvania.

In 1916 Jennie filed for and and received a pension (no. 544169) based on the service of her first husband, Truman Lapham in the 35th Illinois. 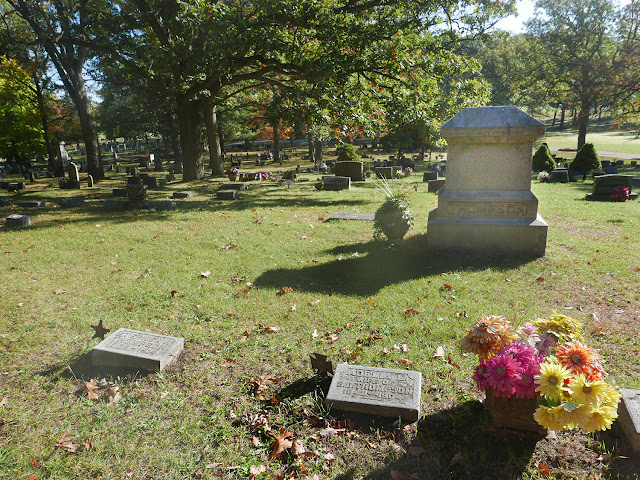