Thomas Otrey was born February 27, 1835, in England, the son of Isaac and Migora Magg.

Thomas emigrated from England and eventually settled in western Michigan.

He stood 5’8” with brown eyes, light hair and a dark complexion and was a 24-year-old carpenter probably living in Muskegon County, Michigan, when he enlisted in Company H on May 6, 1861. (Company H, formerly the “Muskegon Rangers,” was made up largely of men from the vicinity of Muskegon and Newaygo counties.) He was sick in the hospital from August of 1862 through October of 1862, but eventually returned to duty and was wounded on May 3, 1863, at Chancellorsville, Virginia. Again he recovered and reenlisted on December 24, 1863, at Brandy Station, Virginia, crediting Muskegon, Muskegon County. He was presumably absent on veteran’s furlough in January of 1864 and probably returned to the Regiment on or about the first of February.

Thomas was reported absent sick or wounded in the hospital in May of 1864 (he may have been wounded during the Wilderness/Spotsylvania campaigns), and was still absent sick or wounded when he was transferred to Company A, 5th Michigan Infantry upon consolidation of the 3rd and 5th Michigan Regiments on June 10, 1864. He remained absent sick through July of 1864, and was mustered out on July 5, 1865, at Jeffersonville, Indiana.

It is not known if Thomas returned to Michigan after the war.

It is likely that Thomas was the brother of Angelina Otrey who married Samuel Jenner, also formerly of Company H, and who would also live in both Big Stone, Minnesota and possibly El Paso, Texas, as well.

In 1875 Thomas acquired some 148 acres of land through the land office in Litchfield, Minnesota, and in 1880 he was working as a farmer, married and living in Trenton, Big Stone County, Minnesota. In 1883 he acquired an additional 160 acres through the office in Benson, Minnesota. He was reported living as “uncle-in-law” to Linn Smith and his family in Otrey Township, Big Stone County, Minnesota in 1900. Also living with Linn Smith was Samuel Jenner, listed as “father-in-law.”

He was a member of the Old 3rd Michigan Infantry Association. In 1877 he applied for and received a pension (application no. 148129).

Thomas died on January 3, 1920 in El Paso, Texas, and was buried in Concordia Cemetery in El Paso: GAR lot, Protestant section (listed as “Otery” on his grave marker). 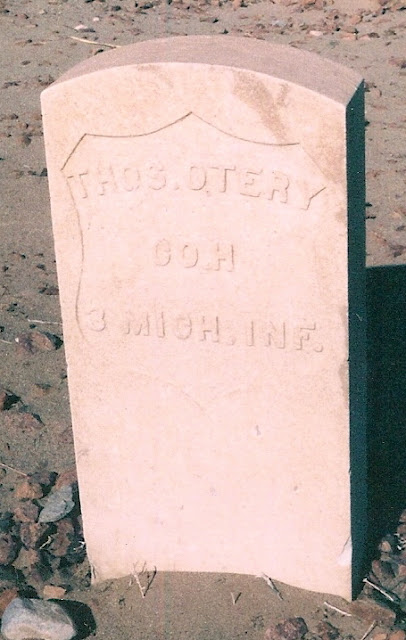