His family eventually moved north from Allegan County and had settled in the vicinity of Fremont, Newaygo County, by 1855 when William was enrolled in the school at Elm Corners (present-day Fremont).

William stood 5’9” with black eyes, dark hair and a fair complexion and was 18 years old and probably working as a laborer and still living in Newaygo County when he enlisted with the consent of the Justice of the Peace in Company H on May 6, 1861. (Company H, formerly the “Muskegon Rangers,” was made up largely of men from the vicinity of Muskegon and Newaygo counties.)

He was reported as a pioneer (probably for the Brigade) from July of 1862 through October. William reenlisted on December 24, 1863, at Brandy Station, Virginia, crediting Muskegon, Muskegon County, was presumably absent on veteran’s furlough, probably in Michigan, in January of 1864, and he probably returned to the Regiment on or about the first of February. He was a Brigade pioneer in April of 1864, probably hospitalized in May and was still absent sick when he was transferred to Company A, Fifth Michigan infantry as a Corporal upon consolidation of the Third and Fifth Michigan Regiments on June 10, 1864. He was reported absent sick through at least July of 1864, and was mustered out on July 5, 1865, at Jeffersonville, Indiana.

Following his release from the army William returned to Newaygo County.

By 1870 he was working as a farmer and living with his wife and children in Fremont Center, Sheridan Township, Newaygo County; he resided in Sheridan the rest of his life.

In September of 1875 Calista applied for and received a pension no 172,946. By 1880 she was living in Fremont, Sheridan Township; also living with her were her two children, Alphonse and Nellie. She was still living in Fremont in 1883. 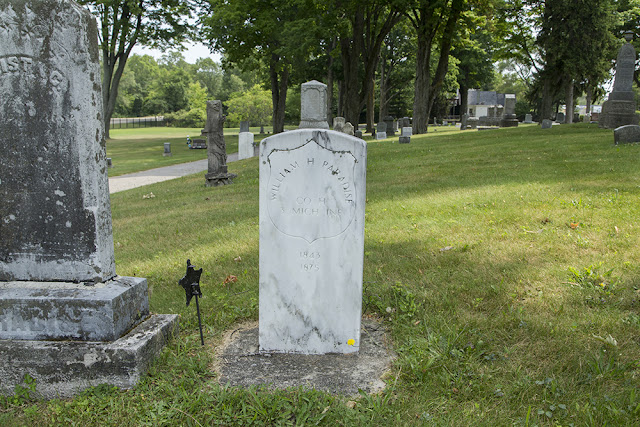