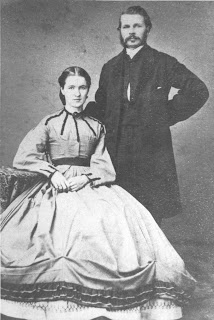 Marriage
At least 957 men were married either before, during or after the war. Of that number 266 men married a second time, and 11 men married four times.

At least 291 men were reported at death as widowers, and at least 19 were widowers twice.

Families
At least 765 men had children and 20 of them had 10 or more children. Andrew Kirschman, Theodore McClain and Elam Moe tied for the record: each man had at least thirteen children. In Elam's case, two of his sons, Daniel and Robert also served in the Old 3rd Michigan, and all three survived the war.

Related to each other
Of the 1,411 men enrolled in the regiment, at least 289 were related in one way or another. (This does not include the many relationships by marriage or distant family connection such as first cousins, brothers-in-law, etc.) There were at least 10 known father-son combinations, 2 uncle-nephew combinations: Stephen and Clarence Lowing and Ezra and Dennis Guernsey, and at least 154 brother combinations.

(photo above: Warren Wilkinson and his wife Alice Foster)