New York native Elihu married Canadian-born Mary Winegarden in Windham, Ontario in December of 1831. The family moved from Canada to Cattaraugus County, New York in 1838, then headed westward settling about 1840 in Lake County, Indiana, where they remained until sometime around 1848 when the family moved to Michigan. By 1850 Elisha was running a hotel in Prairieville, Barry County, where Andrew attended school with seven of his younger siblings, including his brother Edwin who would also join the Third Michigan. By 1860 Elisha or Elihu had moved the family to a farm in Leighton, Allegan County where Andrew worked as a farm laborer (along with his younger brother Edwin) and was living with his family.

He was 27 years old and probably still living in Allegan County when he enlisted as Fourth Sergeant in Company E on May 13, 1861; his younger brother Edwin would join Company E the following year.

It is quite possible that Andrew enlisted in the Hastings Rifle Company in April of 1861. That company was disbanded shortly after it arrived in Grand Rapids to join the Third Michgian infantry then forming at Cantonment Anderson south of city and its members distributed to other companies of the Regiment.

Andrew was promoted to First Sergeant on July 19 or July 23, 1861, at Hunter’s Farm, Virginia. He was subsequently promoted to Second Lieutenant and transferred to Company H on August 12, 1862, at Harrison’s Landing, Virginia, replacing Lieutenant Thomas Waters. On September 16, 1862, while the regiment was in camp near Alexandria, Virginia, Andrew wrote to the widow of John Call, formerly of Company E.

It becomes my painful duty to inform you that your husband is no more. He departed this life Sept. 8th, 1862, in the hospital at Alexandria. He died of wounds received in the battle of Groveton Aug. 29th, 1862. Early in the action he received a minie ball in the knee. He was borne from the field by his comrades. His wounds dressed and he was sent to the hospital. None suppose his wound would prove fatal, but it did. I deeply sympathize with you in your great loss. I have known your husband but little over a year yet he seemed as near to me as a brother. He was a favorite of the whole company, brave and generous to a fault. We all mourn his loss and yet almost envy him the proud death he died.

You will see by the note I enclose from the Surgeon in the Hospital that he left no effects of any value. His knapsack with his spare clothes was put aboard a vessel at Harrison’s Landing and when we received them after we returned form Manassas some of them we found to be rotted, having been exposed to the weather. Mr. Call’s was among this number. There was nothing in it except some blankets and a few clothes.

Any information that I can give you I will be most happy to impart. He had about 4 months pay due him at the time of his death.

In October Andrew was transferred to Company K and promoted to First Lieutenant on October 20, replacing Lieutenant Fred Stowe. He was home in Michigan during the winter of 1863, and rejoined the regiment in early March of that year. He was charged with neglect of duty, in that he reportedly forged discharge papers for a private, but nothing came of this apparently and he was never court-martialed.

Andrew was then appointed acting Regimental Quartermaster from July 13, 1863, through September, and in December he was on detached service in Michigan, probably recruiting for the Regiment.

Although he was still reported detached in Grand Rapids in January of 1864 (since December 28, 1863), he was promoted to Captain on January 18, 1864, and commissioned to date November 1, 1863. He eventually returned to the Regiment before the spring campaign of 1864, and was killed in action on May 6, 1864, at the Wilderness, Virginia.

According to Dan Crotty of Company F Nickerson was killed on May 7. Some years after the war Crotty wrote that during the engagement at the Wilderness, “The fearful butchery commences on the morning of the 7th, and charge after charge is made on both sides,” and at one point the Regiment had driven the rebels back inside their works. “They reform and drive us back. We take shelter in some temporary works thrown up by themselves, and here hold them in check for awhile. But they come down on us with superior numbers. We keep them on the other side for awhile, and a hand to hand fight takes place. Here is where Captain Nickerson, of company K, was killed by a bayonet thrust.”

In 1870 Elihu and Mary were living in Mason County where Elihu worked as a lawyer. (He owned some $6000 worth of real estate.) 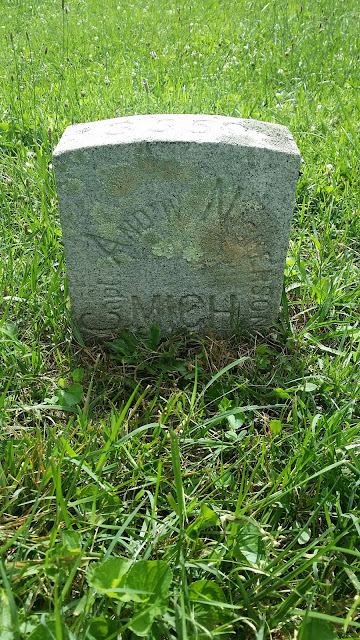