Hiram was born in Vermont and married New Hampshire native Hannah, and by 1830 were living in New York, in Canada East (Quebec) in 1834 and 1836, they eventually settled in New Hampshire. In any case, Hiram moved his family to New York sometime before 1840 and then on to Ohio and finally to Michigan, sometime between 1842 and 1844, eventually settling in Allegan County. By 1860 William was working as a farmer and living with his family on a farm in Leighton, Allegan County; next door lived an older brother Heman and his family. Living with Heman was their brother Hiram who would also enlist in the Third Michigan.

William stood 5’6” with blue eyes, brown hair and a light complexion and was 29 years old and may have been working in the vicinity of Hastings, Barry County (or he may have been a farmer in Leighton) when he enlisted in the Hastings Rifle Company in April of 1861. The company was disbanded shortly after it arrived in Grand Rapids and its members distributed to other companies of the Third Michigan infantry then forming at Cantonment Anderson just south of the city.

William eventually enlisted in Company K on May 13, 1861 (Hiram R. would join him in 1862). He was taken sick with “remittent’ fever in the summer of 1861 while the regiment was in quarters near Washington, DC, and was hospitalized on August 23 at the Union Hotel hospital in Georgetown. He returned to duty on September 1. William was reported as a company cook in January and February of 1862, and on April 2 or 3, 1862, he was sick in Chesapeake hospital at Fortress Monroe, Virginia, suffering from “catarrhus.” On May 24 he was transferred to Washington where he was admitted on May 25 to Judiciary Square hospital suffering from chronic diarrhea. He remained hospitalized until he was discharged for pneumonia on June 12, 1862, at Judiciary Square hospital, Washington, DC.

After his discharge William returned to Michigan and by about July 1, 1862, was back in Grand Rapids staying at the home of his brother George Haney. According to Henry Haney, an older brother, during the late spring and summer of 1864 William “was engaged in the occupation of peddling maps through Allegan and the adjourning counties, traveling while doing this in a buggy or light-wagon.”

He stayed with George until he reentered the service as a Sergeant in Company H, Twenty-eighth Michigan infantry on September 20, 1864, at Portage, Kalamazoo County, for 3 years, crediting Waterloo, Jackson County, and was mustered the same day at Kalamazoo, Kalamazoo County where the regiment was being organized. The regiment left Michigan for Louisville, Kentucky October 26-29 and remained on duty there until November 10. It participated in the battle of Nashville and subsequently occupied Nashville. The Twenty-eighth moved back to Louisville in mid-January of 1865 and on January 18 was moved to Alexandria, Louisiana where it remained until February 19.

William returned to Grand Rapids after the war and for three years lived with George Haney. About 1869 he moved west. He was living near Sedan (then) Howard County (and now) Chautauqua County, Kansas, from about September of 1870 to May of 1876, “breaking prairie” in partnership with one Thomas Darnell and moved to Ouray County, Colorado in October of 1876.

By 1874 and 1875 they were living in Kansas and by 1878 and 1879 had settled in Colorado. By 1880 William was working as a farmer and living with his wife and children in Park, Ouray County, Colorado. He was living in Ouray County, Colorado in 1888 and in 1900 working as a farmer. By 1908 he was living in Cripple Creek, Colorado. He remained in Colorado until about 1911 (probably after his wife died) when he moved to California, settling in Corning, Tehamo County. 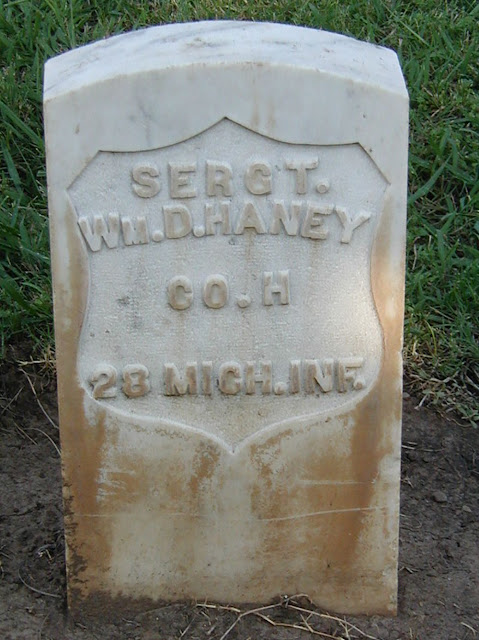