New York native Abram married Canadian-born Louisa in 1837 in Scotland, Ontario, Canada, where they resided for many years. Sometime after 1849 Abram brought his family to Michigan and by 1850 he was working as a physician and James was attending school with his younger brother Charles (who would also join the Third Michigan) and younger sister Cecilia in Detroit, Wayne County. Abram eventually settled his family on the western side of the state and by 1853 when Louisa died they were living in Grand Haven, Ottawa County. In about 1855 Abram remarried New York native Laura Robinson (b. 1813), and by 1860 he was practicing medicine in Grand Haven, Ottawa County. (He married his third wife Lucinda Newwell in about 1861 in Michigan.)

James stood 5’8” with brown eyes, black hair and a fair complexion and was a 23-year-old farm laborer probably living in Muskegon or Spring Lake, Ottawa County when he enlisted in Company A, joining his brother Charles, on November 12, 1861, at Grand Rapids for 3 years, and was mustered on December 23 at Detroit. James was reported as a clerk at (presumably Brigade) headquarters from August of 1862 through September, and indeed, according to his pension application declaration of 1905, he “was detailed in General Berry’s Brigade headquarters as clerk at Yorktown,” Virginia (which would have been in the spring of 1862).

It is not known if James returned to Michigan after his discharge from the army.

They settled in Scotland, Ontario where he worked as a druggist for many years. By 1906 he was still living in Scotland, but by 1912 he was reportedly living in Barrington, Massachusetts.

In 1905 his application for pension (no. 1,330,971) was rejected, reasons unknown, but possibly because the charge of desertion was never removed.

James was probably a widower when he died on February 12, 1918, probably in Brant and was buried in Scotland cemetery in Brant. 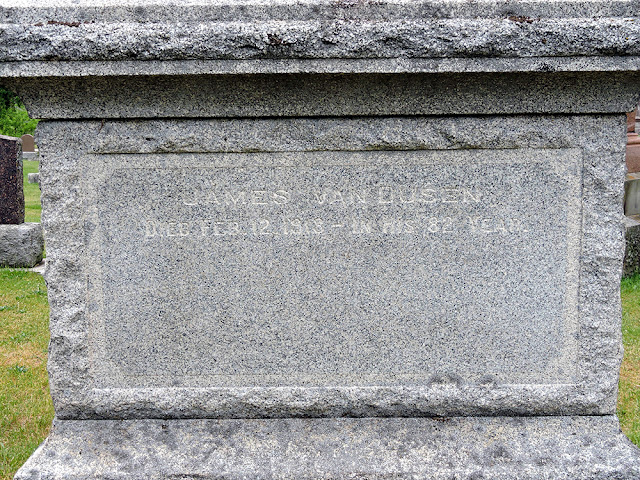